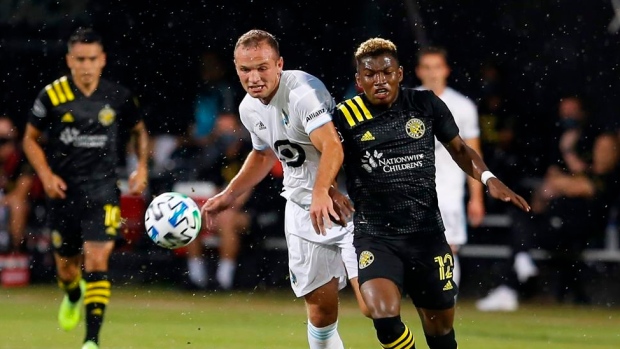 LAKE BUENA VISTA, Fla. — Tyler Miller made a key save in the third round of the penalty shootout, Chase Gasper scored the winning shot in the fifth round and Minnesota United advanced past the Columbus Crew in the MLS is Back tournament Tuesday night.

Minnesota and Columbus played to a 1-1 draw in regulation, but the Loons were a perfect 5-for-5 in the shootout and Miller came up with the one big save needed.

Minnesota United will face San Jose in the quarterfinals of the tournament on Saturday.

“I think we've played our way into the tournament. And I think we’ve got progressively better, every game. And we had to be better tonight, we played a really good team,” Minnesota coach Adrian Heath said.

Columbus was without Gyasi Zardes and Darlington Nagbe for the shootout after they were subbed out earlier in the match. Miller guessed correctly on Chris Cadden’s attempt in the third round, diving to his right and giving Minnesota the advantage.

It was Miller’s second save of the match from the penalty spot. He denied Zardes in the 79th minute with a terrific diving save, but the rebound bounced right back to Zardes and he scored into the open net to pull the Crew even. The penalty came after a careless challenge by Jose Aja in the penalty area. Aja was late and clipped the foot of Derrick Etienne Jr., giving the Crew a clear penalty kick.

But the rebound off the saved penalty was the only great scoring chance for Columbus as the Crew struggled to break down the Minnesota defence all night.

Robin Lod scored in the 17th minute to give Minnesota the early advantage and the Loons nearly made it stand up for the entire match. It was the first goal allowed by Columbus during the Florida tournament and just the second surrendered all season.

“It's been just a matter of time to get on the scoresheet,” said Lod, who scored his first goal of the tournament. “Of course it's nice that it came at this point and brings some more confidence for sure.”

Columbus was viewed as a favourite after a dominant performance in the group stage as the only team to win all three group matches in the tournament. The Crew had convincing wins over FC Cincinnati and the New York Red Bulls before capping the group stage with a 1-0 win over Atlanta United.

“We leave here with our heads high,” Columbus coach Caleb Porter said. "You can’t take away what this group has done in those first three games.”