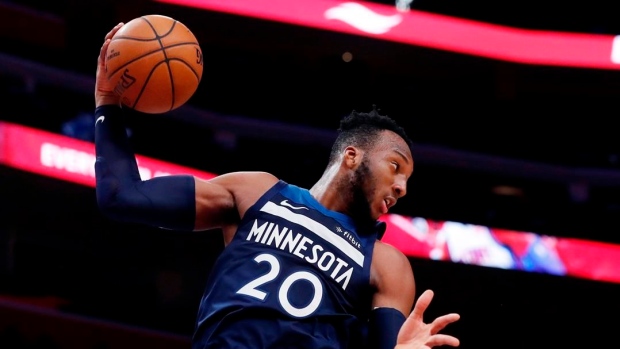 DETROIT — The Minnesota Timberwolves shot an abysmal 6 of 45 from 3-point range in a loss to Denver over the weekend.

That evened out in a hurry against Detroit.

Andrew Wiggins scored 33 points, and Minnesota spoiled Blake Griffin's return Monday night, beating the Pistons 120-114. The Timberwolves shot 8 of 10 from beyond the arc in the first quarter to take a 15-point lead, and they held Detroit at bay after that.

"We talked this morning — how we made sure there weren't any lids on the basket," Minnesota coach Ryan Saunders said. "They deserve a win like this on a back-to-back."

Griffin played for the first time this season, coming back from hamstring and knee issues. Derrick Rose also returned to the Detroit lineup from a strained hamstring, but both he and Griffin played limited minutes.

"We've just got to ask the question: Do we want to win — are we going to come out and play hard, or going to get spanked like this every night?" Rose said. "We need everybody to be on the same page. We need everybody to move in a collective group. We've got to figure it out."

Karl-Anthony Towns scored 25 points for Minnesota, which snapped an eight-game losing streak to the Pistons.

After a 100-98 overtime loss to Denver on Sunday, Minnesota was sharp at the start of this game. The Timberwolves led 41-26 after one, and the Pistons never cut too far into the deficit until the fourth. A 3-pointer by Detroit's Tony Snell made it 109-104, but Towns drew a double team at the other end and passed to an open Wiggins, whose 3-pointer restored the lead to eight.

"Every good thing that happens to Andrew, Andrew deserves, because Andrew does work hard," Saunders said. "He had a different mindset this summer. We had a conversation, so all the credit goes to him for buying in and really delivering for us."

Minnesota led by 19 in the third before the Pistons ran off eight points in a row. Towns ended that quarter with a driving dunk that put the Timberwolves ahead 92-81.

Luke Kennard led Detroit with 25 points, and Snell scored 16. Andre Drummond had 11 points and 12 rebounds, but he went just 4 of 12 from the field.

Griffin played 23:58 and Rose only 19:54. Coach Dwane Casey acknowledged it was hard getting them on the court for significant time together.

Griffin said the chemistry between him and Rose — a new acquisition this season — should be OK.

Each team had a reserve shooting well. Minnesota's Jake Layman made four 3-pointers and scored 16 points. Detroit's Langston Galloway made four 3s of his own and finished with 18 points.

"I feel like I have been getting great shots every game," Layman said. "Some games they haven't been falling, but it's all great looks all around our offence. So, I'm going to keep doing the same thing."