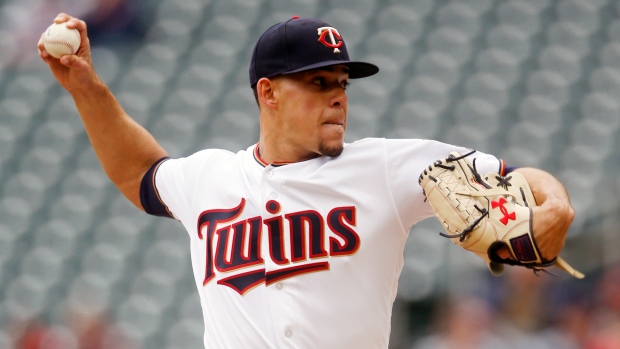 MINNEAPOLIS — The Minnesota Twins set a major league record for home runs last season. They created a bigger buzz with their recent signing of star third baseman Josh Donaldson to a $92 million, four-year contract — the richest in club history for a free agent.

Still, the defending AL Central champions carry with them a pressing question. Is their starting pitching going to be strong enough to not only help them get back to the post-season but play deeper into October this time?

With spring training less than three weeks away, diminishing the likelihood of another acquisition, the Twins have publicly expressed confidence in their rotation for 2020.

“As it stands right now, I feel really good about the group we have and the ability to build around that,” president of baseball operations Derek Falvey said. He added: “We never say never to anything, but we feel like we have a lot of good guys in the mix.”

Twins starters in 2019 ranked 11th in the majors in ERA (4.11) and sixth in innings (889 2/3), with pitching coach Wes Johnson making a strong impact in his first year with the team. All-Star José Berríos, perhaps the next player in line for a long-term contract, is back to lead the quintet after a career-best season. Jake Odorizzi, coming off his first All-Star selection, returned on a one-year deal.

The Twins need more than those two, though, if they're going to do better than the Division Series sweep they were handed by the New York Yankees. When right-hander Michael Pineda was suspended for 60 games and the post-season for using a banned diuretic, the Twins ended up sending rookie Randy Dobnak to the mound at Yankee Stadium for Game 2 of that series.

Kyle Gibson, whose health contributed to a late slump that left him out of the playoff rotation, became a free agent and signed with Texas. Martín Pérez did, too, and went to Boston.

The Twins picked up a pair of veteran replacements in Homer Bailey and Rich Hill. The 33-year-old Bailey went a combined 13-9 with a 4.57 ERA for Kansas City and Oakland in 2019. Hill, who will turn 40 in March, is recovering from elbow surgery and on track to start a rehabilitation assignment in June. His season with the Los Angeles Dodgers was cut short by a forearm injury.

The absence of Pineda and Hill at the beginning of the season will require more than one of those rookies pressed into duty last year to continue to progress, whether Dobnak, Devin Smeltzer, Lewis Thorpe or Sean Poppen.

“The lifeblood of a sustainable winner or a championship organization is to have some young players get better and find a way to impact you,” Falvey said, adding: "So we’re going to count on those guys to get it done for us.”

Said Johnson: “These guys have been in the fire, in meaningful games down the stretch.”

If the rotation can stay stable through the first five weeks or so, the Twins ought to be in decent shape. Pineda's suspension will end after 39 games, sometime in mid-May. Hill is expected to be ready around the All-Star break.

“So there's cavalry coming, and that's in addition to some of our prospects who’ve started matriculating through the minor leagues,” general manager Thad Levine said Friday at the team's annual fan festival. “Then in the meantime, we saw some guys get to the big leagues last year in Thorpe, Dobnak, Poppen, Smeltzer, who we feel very confident can hold down the fort until those guys are ready. There will be some injuries along the way, so we’ll figure it out.”

Reduced this year from three days to two, TwinsFest was launched with the announcement that former first baseman Justin Morneau was elected to the club's Hall of Fame, becoming the 34th member. He'll be inducted May 23 in a pregame ceremony at Target Field.

Morneau, who serves as a TV analyst for select Twins broadcasts and is a special assistant to the baseball operations department, played 11 of his 14 major league seasons for Minnesota. He won the 2006 AL MVP award.