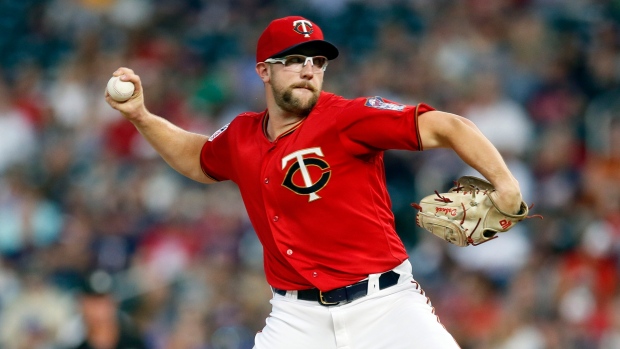 MINNEAPOLIS — Two years ago, Randy Dobnak had no idea he would be pitching in the majors this September. Without worry, Dobnak and his girlfriend planned their wedding.

The Twins won for the sixth time in eight games to maintain their four-game lead over Cleveland in the AL Central. They reduced their magic number to clinch the division title to five with eight games to play.

"Yeah, I'm having the time of my life up here," Dobnak said.

Marwin Gonzalez hit a two-run double for the Twins, and Miguel Sanó had a run-scoring triple.

Kansas City has dropped seven of eight to fall to 56-99. It is one defeat away from its second consecutive 100-loss season and No. 6 in franchise history.

The Royals could give the majors four 100-loss teams in a single season for only the second time.

Dobnak (1-1) gave up one run and three hits in his fourth start and eighth major league appearance overall. He has surrendered two earned runs in 10 1/3 innings over his past two outings.

"He's pitched great for us," manager Rocco Baldelli said. "He certainly has earned that win, this year and big picture. He's certainly earned it."

"I like the fact that he had run to his fastball," Yost said. "He had some sink to his fastball. He had some fastballs that were going two different ways. We thought he had a good slider. He had a real quick arm which had deception built in, especially on the slider."

Trevor May struck out the side in his second save of the season.

Baldelli said Dobnak will make one more appearance before leaving for his wedding in Williamsport, Maryland, on Sept. 28.

"The best is yet to come, though, getting married," Dobnak said.

Minnesota jumped out to a 2-0 lead in the first. Nelson Cruz hit a sacrifice fly, and Sanó tripled home Jorge Polanco.

"I felt strong, honestly, from the beginning," Skoglund said. "I walked the first hitter, unfortunately, and that grinds my gears a little. And then the second hitter got that little knock down the line. But other than that, I felt really strong."

Kansas City got one back on Alex Gordon's RBI double in the sixth, but Gonzalez responded with his two-run double in the bottom half.

Minnesota outfielder Byron Buxton was back in the team's clubhouse after he had left shoulder surgery on Sept. 10.

Buxton said the surgery was to repair the labrum and he'll be in recovery and rehab for four to six months. Buxton's left arm will be immobilized in a sling for six weeks. He hopes to be ready for the start of spring training next season.

"It was a little bit better than what they anticipated, which is a very good part," Buxton said. "It's just one of those things. Frustrating, but it's part of the process."

Buxton got hurt when he collided with the centre-field wall in Miami on Aug. 1.

"I think I just hit it at an awkward angle," Buxton said. "I know I felt it when I dislocated it. But at the time, with the adrenaline pumping, you don't really think about it."

Royals: DH Jorge Soler fouled a ball off the top of his left foot during an at-bat in the third inning and was checked out by trainers before staying in the game.

Twins: 1B C.J. Cron started for the first time since Sept. 15. He is dealing with a bruised thumb. Baldelli said the team has "been experimenting a little bit" with some of the rehab work to allow Cron to return. Baldelli said Cron won't play every day but is feeling better.

Royals: Right-hander Glenn Sparkman (4-11, 6.02 ERA) will start against Minnesota for the fourth time this season.