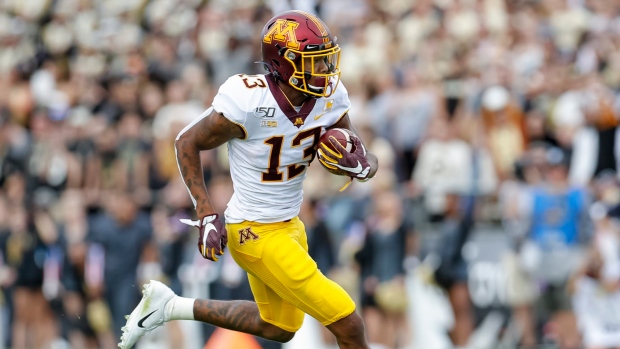 MINNEAPOLIS — Minnesota wide receiver Rashod Bateman announced Tuesday he has opted out of the 2020 season amid concerns about the coronavirus and will forgo his remaining two years of eligibility to enter the 2021 NFL draft.

Bateman posted a professionally created video on his Twitter account that he narrated in explanation of his decision, which the university confirmed.

"I’m now making the hardest decision that I’ve ever had to make in my life," Bateman said.

The native of Tifton, Georgia, totaled 111 receptions, 1,923 yards and 17 touchdowns over two seasons, tying for 12th, eighth and fifth, respectively, in those categories on the program’s career list. Bateman was a third team All-American and first team All-Big Ten selection in 2019, winning the conference’s receiver of the year award.

The Gophers previously had the other half of their star pass-catching duo from last season depart, with Tyler Johnson’s graduation. He was drafted in the fifth round by the Tampa Bay Buccaneers.

Bateman is the first prominent player in the Big Ten Conference to declare he’s skipping the 2020 season due to the COVID-19 pandemic. Virginia Tech standout cornerback Caleb Farley recently announced he will not play for the Hokies if there is a season.