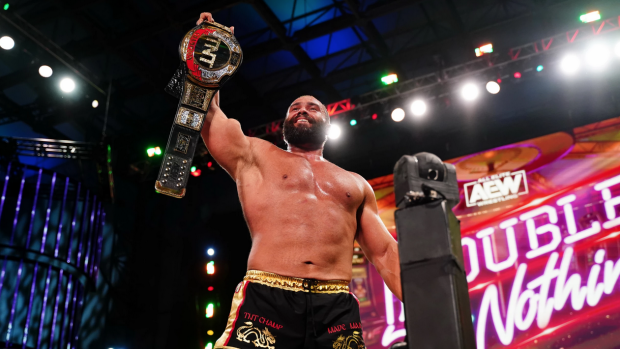 All Elite Wrestling Dynamite is headlined this week by Miro defending his TNT Championship against The Dark Order's Evil Uno, while coming off of last week's tag match, the AEW World Tag Team Champions The Young Bucks team up with Brandon Cutler to take on Death Triangle (PAC and Penta El Zero M) and Eddie Kingston in trios action. You can catch AEW Dynamite at 10pm et/7pm pt on TSN2, the TSN app, streaming on TSN Direct and on TSN.ca.

TNT Championship match: "The Best Man" Miro (c) vs. Evil Uno - Evil Uno is the latest man to step up and challenge the one-man wrecking crew that is Miro for his TNT title. Since defeating Darby Allin for the championship on the May edition of Dynamite, Miro has successfully defended his title against both Dante Martin of Top Flight and "The Murderhawk Monster" Lance Archer via his punishing modified camel clutch, Game Over. The undefeated Bulgarian now looks to prevent Uno from taking the TNT title back to The Dark Order, but Uno's faction has been trying to help him prepare for Game Over. On the latest Being The Elite, we saw Uno taking the hold from multiple members of The Dark Order in an attempt to find a way to counter what is seemingly Miro's magic bullet. Does Evil Uno hold the secret to defeating Miro, something that nobody else in AEW has been able to do as of yet?

Trios match: The Elite (Nick Jackson, Matt Jackson and Brandon Cutler) (w/ Don Callis) vs. Death Triangle ("The Bastard" PAC and Penta El Zero M) and Eddie Kingston - The genesis of this match came out of last week's tag-team encounter when Brandon Cutler (reluctantly) helped the Jacksons defeat PAC and Penta. To fend off the post-match beatdown from the Bucks on Death Triangle, Eddie Kingston intervened in defence of one of his former allies. After the match, Death Triangle made it very clear that they didn't welcome the help of Kingston, a man who once tried to turn Rey Fenix, Penta's own brother (and a man currently on the shelf thanks to the Jacksons), against him, but "The Mad King" made his intentions very clear, telling the duo that "The enemy of my enemy is my friend." The alliance between Kingston and Death Triangle is obviously a very uneasy one, but the three men will have to coexist to enact a measure of revenge against the Young Bucks and Cutler. Can The Elite pull off another victory or will Kingston get a win in his ongoing war against the Jacksons?

Team Taz ("The Machine" Brian Cage and Powerhouse Hobbs) (w/ Taz, Ricky Starks and Hook) vs. "Hangman" Adam Page and Preston "10" Vance - There is trouble brewing within Team Taz and it doesn't take a psychiatrist to figure that out. Friday night's match will be the third encounter in recent weeks between Cage and Page with each man holding a victory in the previous two. But the nature of each win is telling. On the Apr. 22 Dynamite, Cage ended Page's lengthy undefeated streak, but only after Team Taz got the jump on Hangman prior to the match and delivered a vicious beating. Page got his win back from Cage at the Double or Nothing pay-per-view when he took advantage of Cage's argument with Starks over The Machine's refusal to use his FTW Championship as a weapon. Friday night's match is an opportunity for Team Taz to once again show a united front as it appears that Cage isn't on the same page (pardon the pun) with his teammates. Backing up Page will be a member of his allies, The Dark Order, in Preston "10" Vance. While Page has teamed up with members of the group in the past, this will mark the first time he's teamed with Vance. Will their inexperience as a team prove to be their downfall or will the duo be able to take advantage of the obvious cracks in Team Taz's facade?

"The Native Beast" Nyla Rose (w/ Vickie Guerrero) vs. "Legit" Leyla Hirsch - Friday night's matchup will be an encounter between one of AEW's most physically dominating women and its most diminutive when Rose meets Hirsch. During last week's title celebration for the new AEW Women's World Champion, Dr. Britt Baker, DMD, Rose made it quite clear that she intends to become AEW's first two-time women's champ. To get on the road back to the title, she'll first have to get by Hirsch. Hirsch heads into Friday night riding a 10-match winning streak. Coincidentally, one of the matches during this run was a tag-team victory where Hirsch teamed up with Ryo Mizunami to defeat the team of Rose and Madi Wrenkowski, in the only previous bout between the two women, back in April. Can Hirsch keep this impressive streak going or will Rose use Hirsch to let Baker know she's coming for that title of hers?

Christian Cage vs. Angelico (w/ "Big Money" Matt Hardy) - The Hybrid 2 might not officially be members of the Hardy Family Office, but Matt Hardy has never been shy about using mercenaries to do his dirty work and that's exactly what Angelico will be doing on Friday night. Hardy finds himself once again embroiled in battle with his eternal rival, Christian Cage, following the events of the Casino Battle Royale at Double or Nothing in which Cage eliminated Hardy. Hardy laid Cage out on last week's Dynamite with a Twist of Fate on the ramp after the six-time world champion teamed with Jungle Boy to defeat the HFO's Private Party (Marq Quen and Isiah Kassidy). It's only a matter of time before Cage and Hardy, two men who have met in the ring nearly 200 times over their careers, do battle once more, but before that can happen, Cage will need to fend off the challenge of Angelico. Will Cage be able to focus on the task at hand or will Hardy's presence allow Angelico to become the first man to defeat Cage in AEW?

- "The Murderhawk Monster" Lance Archer is in action

- Tony Schiavone catches up with "The American Nightmare" Cody Rhodes