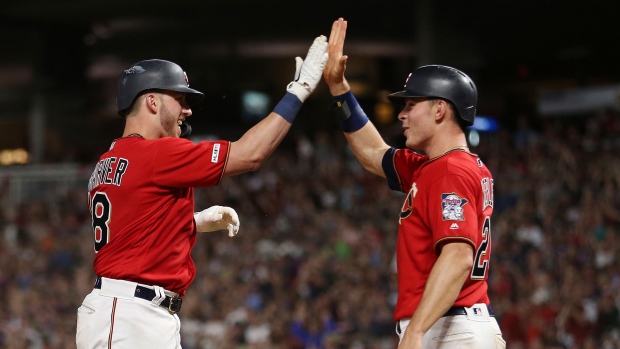 MINNEAPOLIS — Stepping into the batter's box in the eighth inning, Mitch Garver was thinking home run. So were his teammates, with four players in the dugout predicting Garver would hit one.

Garver knew he had to step out and reset. His teammates sat back and enjoyed their prognostication.

Garver's two-run homer in the eighth inning snapped a scoreless tie, and Kyle Gibson gave up two hits in eight innings in the Minnesota Twins' 2-0 victory over the Kansas City Royals on Friday night.

"As soon as it was off the bat, I was up yelling for it to keep going," Gibson said. "So yeah, that was a pretty exciting moment and the fans got loud. Even (Max) Kepler afterwards said, 'Man, this place gets loud, huh?' I was like 'Yeah.' When it's sold out and that type of at-bat, the fans let us hear it. That was pretty cool."

Garver's homer was deep to the berm in centre field off Kansas City reliever Jake Diekman (0-4) after Kepler had walked. Minnesota has won 16 of its past 22 games and started a big weekend at Target Field with three expected sellouts and Joe Mauer's number retirement ceremony on Saturday.

Garver came out for a curtain call in front of a sellout crowd that has begun to show up for the first-place Twins. He continued his own breakout season with his career-best 11th home run.

"By far the coolest thing I've ever done on a baseball field, by far," Garver said. "I've never had a curtain call. I've always dreamed. I've watched Joe (Mauer) do them. I've watched (Eddie Rosario) do them. Like, 'Man, I want to get one of those one day.'"

Gibson (7-3) struck out six in his longest outing of the season. Taylor Rogers secured his seventh save in nine chances.

Kepler reached base three times but Minnesota's No. 1 offence was stifled by Royals starter Brad Keller. Keller matched Gibson along the way, surrendering just three hits and striking out five.

Keller has quality starts in four of his last five outings and has allowed 11 runs in 36 innings (2.75 ERA) over that span.

"I definitely feel in command of my pitches right now and feel really good with my body," Keller said. "Just try to keep it on a roll."

Once the Twins got to the Royals' bullpen, Garver finally supplied the power they've enjoyed all season.

"It was like middle up, on the inside corner," Diekman said of the pitch. "That's a terrible spot."

It was the Minnesota's league-leading 133rd homer and the Twins have a home run in 12 straight games.

Byron Buxton was hit in the wrist by a pitch from Keller in the sixth inning but stayed in the game. However, Marwin Gonzalez pinch hit for Buxton in the eighth and Buxton was announced out with a right wrist bruise.

"I got on deck and it's pretty painful to swing on deck," Buxton said. "I've got to try and swing a couple of times and it wasn't feeling too good. I obviously would have had to tell them. But me being how I am, I don't want to come out of the game. It's just one of those things. You've got to put things in perspective."

Manager Ned Yost indicated Bonifacio's arrival was because the team is facing a slew of left-handed starters in the next two series and that his appearance will be short-lived with Hunter Dozier close to being activated from the injured list.

Minnesota swapped out right-handed relievers, sending Fernando Romero back to Triple-A and recalling Zack Littell. Baldelli said Littell, mostly a starter in his minor league career, will be used in the bullpen going forward.

Royals: Alex Gordon was in the lineup at designated hitter a game after being hit by a pitch in the shoulder.

Twins: Rogers pitched for the first time since June 6 after dealing with a back injury.

RHP Jake Odorizzi (9-2, 1.92 ERA) starts for Minnesota in the second game of the three-game series, with Kansas City countering with RHP Glenn Sparkman (1-2, 3.58). Odorizzi has won nine straight decisions, the longest active streak in the majors, and hasn't allowed a run in six of his past seven starts. Sparkman is 1-1 with a 3.15 ERA in four games as a starter this season.