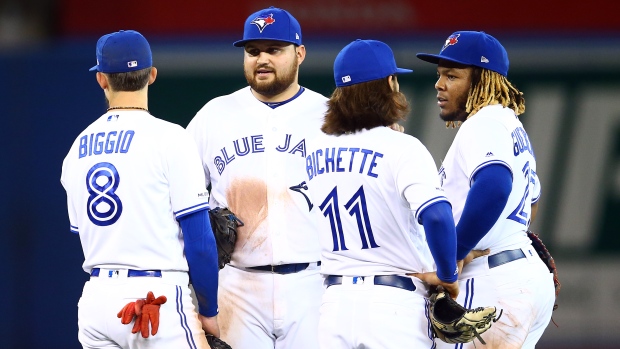 It’s been more than three months since Ross Atkins sat at a Rogers Centre podium and explained the 95-loss season his ball club had just completed.

Impact was needed, the Toronto Blue Jays GM said, a much different line of thinking than the quest for depth that had marked the 2017 and 2018 off-seasons.

Fast forward about 14 weeks and the Blue Jays have spent $40-plus million on the 2020 roster, with top-of-the-rotation lefty Hyun-Jin Ryu’s $20-million salary accounting for almost half of that investment as part of an eye-opening four-year, $80-million pact.

There’s no arguing the fact that this rebuild is starting to turn a corner, and the Atkins and Mark Shapiro-led front office has moved on to the next step in an effort to inch back towards postseason contention.

How much their young team can improve on the 67 wins from a year ago remains to be seen, but there’s no doubt this roster is much better today than it was the day Atkins laid out his off-season plan back in October.

A month away from Blue Jays pitchers and catchers taking to the field in Dunedin, Fla. on Feb. 13, here’s an in-depth look at how the opening day roster and lineup configurations could shake out.

Outside looking in: No one yet

Both earn high marks for their work behind the plate, including regularly stealing strikes with their pitch framing, leaving the pitching staff in good hands on a daily basis.

Offensively, they complement each other well, with Jansen hitting from the right side and McGuire from the left.

It may be more of a 60/40 situation in Jansen’s favour rather than a strict platoon heading into the spring, but McGuire’s offensive upside may be understated and either could emerge as the season progresses.

There’s a reason rival clubs were asking about one or the other in trade talks this winter – it’s a good situation behind the plate for manager Charlie Montoyo, especially if Jansen rebounds a little bit with the bat after posting just a 68 wRC+ in his first full season.

A veteran depth option will be added before mid-February, but that player will be stashed at Triple-A as injury insurance.

Two things stand out when you take a look at this infield group: 1) All four starters are sons of former big-league all-stars, with Shaw and his dad, former closer Jeff Shaw, joining the kids. 2) It’s a much more versatile right side of the infield from the days when Devon Travis and Justin Smoak were around, as Biggio and Shaw can both capably play at least three positions. 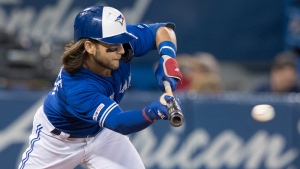 That versatility is what gives the Jays some flexibility from now until opening day.

Biggio’s ability to play second base, first base and the outfield – even centre field is being discussed as a possibility right now – gives Atkins the option to add another low-cost infielder (think last year’s Eric Sogard and Freddy Galvis signings) and move some of the chess pieces around.

If an infielder is added, it could be someone who can play a capable shortstop, as right now Drury would be the backup behind Bichette, and that doesn’t seem ideal.

Tellez will need to earn his roster spot after posting a sub-.300 on-base percentage, but even with Shaw signed, as the roster is currently constructed, he looks like the best bet to see some DH time.

There are bench jobs to be won and lost this spring, and it would be surprising if a veteran or two isn’t added to the mix.

Gurriel and Grichuk are the starters in the corners, but centre field has been identified as an area Atkins needs to upgrade, both short term and long term. 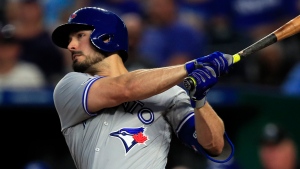 The question is whether that will happen over the next two months or if they’ll patch job the position until next off-season when they attempt to transition into a legitimate postseason contender ahead of the 2020 campaign.

If that happens, Hernandez and potentially Biggio would benefit, while Fisher and Alford, two players who are out of options and have to be exposed to waivers to be sent down in March, would be the leading candidates for bench roles ahead of the optionable Davis and McKinney.

There isn’t anything left on the free agent market that would project as a big upgrade in centre field – despite the obvious defensive shortcomings, Hernandez’s power is still exciting and he’s only 27 – so it would have to be some sort of trade making that happen.

At this point, you should probably expect centre field to be the top item on the shopping list next winter.

The Jays’ stated desire to improve the rotation has to be deemed a success, as Ryu and Roark will form the most dependable duo they’ve had atop the rotation since 2017. 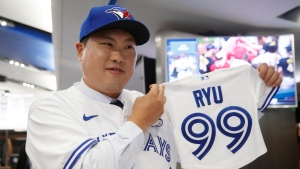 With Ryu, there’s also that dream scenario that he stays healthy for 200 elite innings, because he’s proven he can be elite at 150 to190 a handful of times.

Roark is expected to provide innings, durability, and an ERA around 4.00.

Shoemaker is coming off a torn ACL, but that’s better than another arm issue for the oft-injured righty, so there’s both risk and upside there.

The Jays took Anderson’s $8.5 million option off the hands of the Milwaukee Brewers for him to start, but the 32-year-old righty may have to do better than the 4.21 ERA he posted across 132 frames last season or he’ll be pushed by Anthony Kay, T.J. Zeuch and eventually Nate Pearson as the season moves along.

The battle for the fifth and final spot in the rotation will be the most intriguing of the spring.

Internally, the Jays are crossing their fingers that Borucki’s left elbow can stay healthy and he breaks camp in the rotation, but that’s tough to bet on given the track record.

Three other right-handers could be legitimate candidates with strong springs: Thornton, who registered a 4.84 ERA across 154.1 innings as rookie, Waguespack, a nice surprise late in the season with a 4.13 ERA in 13 starts, and Yamaguchi, a 32-year-old veteran of more than 1,000 innings in Japan.

As always, health will play a role in how this ultimately shakes out before March 26.

There should be a handful of veteran names added to the competition over the next few weeks, but as of today the arms that lose out in the rotation battle will slide into bullpen roles, and don’t be surprised if the fifth starter ends up being some sort of opener with Waguespack and Thornton filling bulk roles and Yamaguchi used as a Swiss Army knife. 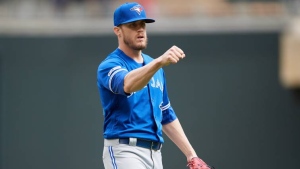 The Jays gave Giles $9.6 million in his final year of team control, and the closer was absolutely dominant in 2019, striking out 83 hitters in just 53 innings on his way to 23 saves.

In front of Giles, Bass will likely get first crack at a setup role after the Jays claimed him off waivers from the Seattle Mariners in October, while Font had a nice run out of the ’pen last season after being acquired from the New York Mets.

Gaviglio was used for 95.2 innings last season, but his 4.61 ERA was less than inspiring.

Canadian Jordan Romano could also position himself to claim a roster spot with a good spring. 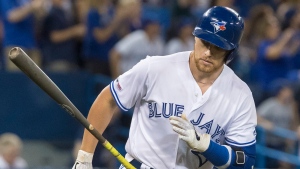 Bichette proved to be dynamic out of the leadoff spot from the minute he was called up last summer, while Biggio could be an on-base machine ahead of the run producers and gives Montoyo a left-handed bat to move around between a host of righties.

Shaw should help in that regard, as well, and he’ll be the everyday first baseman against right-handed pitching.

McGuire won’t continue to hit .300 against right-handers and the Jays are confident Jansen, despite his sub-.600 OPS last season, will be better with the stick against same-side arms.

Oddly, the left-handed hitting Tellez hitting southpaws better than righties last season, but one look at the numbers and options above allow you to question how much production the Jays will get out of the DH spot this season. There’s definitely room for an upgrade in either centre field, which would allow Hernandez to DH more, or by way of a versatile bat and bench piece.

The top of this lineup has a chance to be absolutely devastating against left-handers. 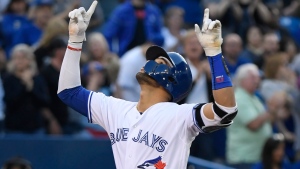 Bichette and Gurriel crushed southpaws last season, while Guerrero Jr.’s lack of success against them is a bit confusing given he raked against lefties in the minors.

Here’s betting that turns out to be a statistical blip of just 145 plate appearances.

Hernandez and Grichuk are also better against lefties, while Biggio’s ability to get on base at a high rate stays intact against same-side pitching and the power dips.

Fisher is on the roster because he’s out of options, but he has at least shown an interesting trend of being much, much better against left-handers at both the minor and major league levels over his career.

Alford, another player out of options but who could benefit from the addition of the 26th roster spot, shows similar reverse splits and couldn’t hit left-handers in the minors.

McGuire and Shaw should never be in the lineup when a lefty is on the mound, and first base against southpaws will be the domino that helps put this puzzle together.

As of mid-January, Drury has a role, but he couldn’t hit much in 2019 and it didn’t matter which arm the pitcher threw with.

Similar to the lineup against right-handers, it’s clear there’s a piece or two missing with a month to go until spring training.​