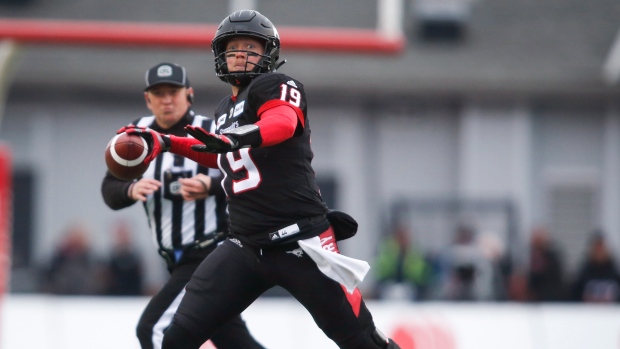 Calgary Stampeders quarterback Bo Levi Mitchell has added two more NFL teams to his list of December workouts, one of which is the New York Giants, according to TSN Football Insider Dave Naylor.

Hearing that Calgary QB Bo Levi Mitchell has added 2 more teams to his December NFL workout schedule. That’s now 8 in all, or one quarter of the NFL. #CFL #NFL

Hearing that the @Giants are one of the team’s recently added to Bo Levi Mitchell’s NFL workout schedule. Has already worked out for Bills, Broncos, Bears, Jaguars and Vikings. Has three more to come this month. #CFL #NFL

Mitchell has already worked out for the Minnesota Vikings, Denver Broncos, Jacksonville Jaguars, Chicago Bears, and Buffalo Bills. With the two added workouts, Mitchell is now up to eight NFL workouts this month.

The 28-year-old Mitchell was named Grey Cup MVP after leading the Stampeders to a 27-16 win over the Ottawa Redblacks in the championship game last month. Mitchell was also named Most Outstanding Player for the second time in his CFL career this season.

The Eastern Washington product finished the season with 5,124 passing yards and 35 touchdowns to 14 interceptions.

While with Eastern Washington Mitchell won the Walter Payton Award, given to the most outstanding offensive player in the FCS. The award has also been won by notable NFL quarterbacks Tony Romo and Jimmy Garoppolo.