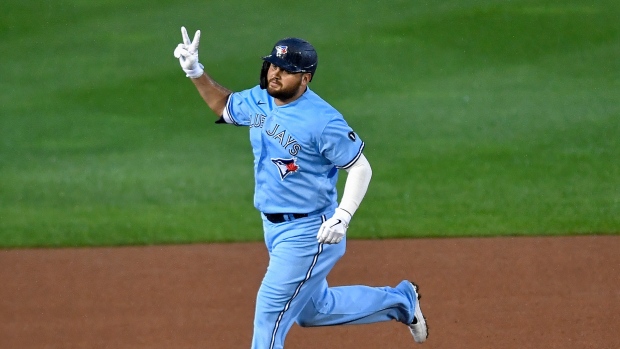 TORONTO — There are many reasons the Toronto Blue Jays have been surging since Bo Bichette went down, and Rowdy Tellez is one of them.

It’s been quite the turnaround.

With 21 home runs in 111 games, the power was there for Tellez, but ugly at-bats and chasing bad pitches were far too often the norm for the big left-handed hitter.

Adjustments to the approach were needed and manager Charlie Montoyo publicly made no secret about that whenever Tellez scuffled.

But over the winter, Tellez reworked his swing, losing a hitch by changing how he loads his hands, and the results have been noticeable two-thirds of the way through this 60-game sprint.

Less fouling pitches off and a whole lot more barrels on the baseball have been the byproduct, with Tellez’s contact rate jumping significantly this season from 70.5 per cent last year to 78.1 per cent through the Jays’ first 41 games.

As a result of more contact, Tellez’s strikeout rate has dropped a whopping 12 per cent, from 28.4 per cent last year all the way down to 16.1 per cent.

Combine that with the power staying intact and the walk rate jumping, and it’s no surprise that Tellez has been one of the most important hitters in Montoyo’s lineup over the past three-plus weeks, slashing .360/.410/.693 with seven home runs and 18 RBI over his last 83 plate appearances.

It’s hard to quantify confidence, but it’s been everything for Tellez, and his work with hitting assistant Dante Bichette has been key to that.

“Mentally, just trusting myself, really,” Tellez said of his conversations with the 56-year-old former Colorado Rockies slugger. “Understanding how good of a player I am. Understanding that I don’t need to try and be better than anybody else, just stay within myself. So it’s, honestly, just understanding who I am and what I can do and what I’m capable of and not trying to fit the mould of somebody else. That’s really what we talked about, was just kind of having that belief again like I did when I was younger and I think that’s really been a game-changer for me — knowing I can do anything I put my mind to and being more mature as each day goes on.”

Since he arrived in the big leagues at the end of the 2018 season, Tellez has proven to be a streaky player.

When he’s hot, he scorches.

When he’s cold, it’s been demotion-worthy.

That leaves many wondering whether the new and improved Tellez is for real, but there are those within the Jays’ organization that believe he’s turning a corner.

As a form of motivation, they’ve also taken to comparing him to David Ortiz, another late-blooming, cold corner slugger.

“If Rowdy can figure it out, to me I keep thinking that he’s the Big Papi of the Blue Jays,” Bichette said. “He can be that. In batting practice, he can literally do anything he wants with the bat. He can take an inside pitch and hit it out the other way. He can hit every pitch. His strength is almost his downfall because he tries to handle everything. Plate discipline has got to come but I think it’s going to come with confidence for him.

“There’s a lot of work to be done there, but, man, the upside to that kid when it’s all said and done could be the difference-maker for a big-time club.”

In addition to hitting breaking balls better this year, another big step for Tellez has been his work with two strikes.

A career .148 hitter with two strikes, that number is currently sitting at a well-above-league-average .265.

“Two-strike hitting is just not trying to hit the ball out of the park every single swing,” Tellez said. “Now, it’s just trust myself, be a good hitter, use the whole field. Anything can happen. You can make contact on anything. Funky hops through the infield, bleeders, jam shots, find barrels. Anything can happen if you cut it down and just trust yourself.”

Individually, it’s been about as good a two months as Tellez could’ve asked for, but team-wise it’s been even better.

“I’ve always been a competitor,” Tellez said. “I always wanted to be better than everybody. I always wanted to kind of beat people. You can tell in the way I carry myself, you can tell in the way I talk, the way I act. I’m just happy that we’re in this playoff hunt and we have this great core group of guys that are really wanting the same thing. We have no egos, and that’s the biggest part.”​