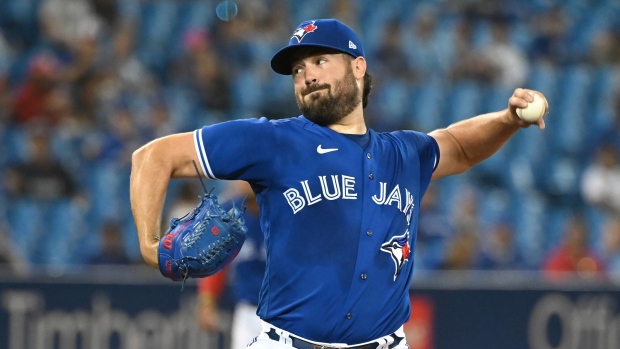 TORONTO — When the Blue Jays re-signed Robbie Ray, they knew he had a chance to look like a bargain for the $8 million investment it took to get the lefty under contract in the early days of free agency last November.

“The talent level, the power, the strikeouts, the 80 (grade) slider,” Jays GM Ross Atkins said a couple days after the early-November signing almost 11 months ago. “He has shown the ability to dominate.”

Rosstradamus and the Jays front office believed because Ray had shown it before.

The Ray that has shown up in his second kick at the free-agent can has not only been dominant, but consistent, too, and he’s the most important arm in a rebuilt, postseason-pushing Jays rotation.

From the day he took the mound in Grapefruit League action back in spring training showing increased velocity on his heater, Ray’s suddenly combined the ability to throw strikes, avoid walks and miss bats.

It’s led to a career year and a deserving run at the American League Cy Young award.

It will also eventually lead to a giant payday for the soon-to-be 30-year-old.

When Ray spoke last November, it was clear what the motivation was for a pitcher who was expected to be one of the top arms on last year’s free-agent market, before he cratered in his final year with the Arizona Diamondbacks.

It was a dreadful year for Ray and when all was said and done he had posted a 6.62 combined ERA and walked 45 batters over 51.2 innings, in the middle of it all being traded to the Jays at the end-of-August deadline during the shortened season.

"I felt like a one-year deal was something that was going to be necessary for me to boost my value going into the next free agency," Ray said when he signed. "It just so happened that there was a fit with Toronto.”

The relationship with pitching coach Pete Walker was one of the reasons and the Jays felt the reclamation work project they started with Ray down the stretch last September needed to continue.

"It felt like he had gotten back closer to that 2017, 2018 performer towards the end of the season and was very effective in his time with us,” Atkins noted.

Prior to this year, the 2017 campaign would’ve been considered Ray’s finest.

At the age of 25, Ray struck out 218 batters across 162 innings and posted a sparkling 2.89 ERA, finishing seventh in National League Cy Young voting and earning a trip to the all-star game.

This year, he’s shaved that figure down to just 2.3 and it’s resurrected his career.

More strikes, more velocity and a devastating slider that has held hitters to a measly .175 average and .325 slugging percentage have been the keys to Ray’s Cy-calibre season.

Will he win it to become the Jays’ first recipient since Roy Halladay in 2003?

If Baseball Writers Association of America voters prefer traditional numbers, Cole has 15 wins to Ray’s 12, while the Jays hurler can claim the AL ERA crown with a strong final two starts — Saturday in Minnesota and then next week against Cole’s Yankees in Toronto.

Ray has the edge in overall strikeouts, while Cole has the K-rate lead.

Unless Ray’s season has been somehow overlooked nationally, it’s bound to be close when votes are revealed in November.

Around that time, the debate will have already changed to, ‘What is Ray worth?’

After taking a one-year, $8-million deal — plus a $150,000 bonus for winning the Cy Young — to rebuild his value, Ray will now be seeking nine figures.

A good starting point might be the contract Zack Wheeler agreed to with the Philadelphia Phillies in December 2019, a five-year, $118-million pact he signed heading into his age-30 year, same as Ray will be in 2022.

That contract is also two years old and how pandemic losses and a CBA that expires Dec. 1 factor in as far as free-agent activity goes is anybody’s guess at this point.

Could that uncertainty help the Jays if they tabled what Ray’s camp, VC Sports Group, deemed to be reasonably close to market value?

The answer to that question likely lies in whether the Jays are comfortable with a contract as long as Ray will be seeking, not the dollar value.

“He’s probably the best pitcher in baseball right now from what I’ve seen,” Jays manager Charlie Montoyo said. “When he takes that mound, everybody feels it. He’s going to give us a chance. When we give him a lead, hopefully, he makes it through seven innings and we’re thinking about pitch count after that. He does what he does.”​