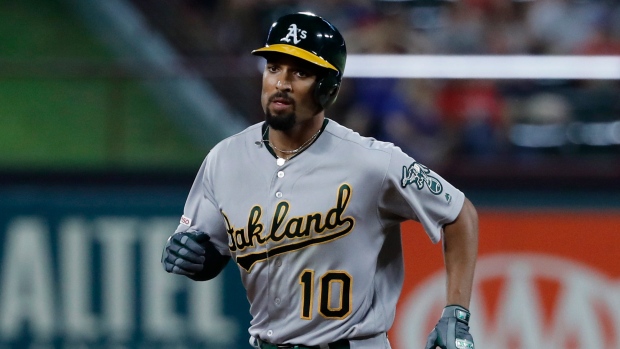 On Tuesday, they continued upgrading, this time shifting their short-term infield picture with the addition of former Oakland Athletics shortstop Marcus Semien on a one-year, $18-million deal, a source confirmed.

The agreement is pending a physical.

From the Blue Jays’ perspective, the move can be explained in one word: Upside.

The Jays are betting Semien can at least split the difference between his two most recent seasons, with the outside chance he can get back to his MVP ways for at least one year.

If things go well for the 30-year-old hitting near the bottom of what could be a top-five offence in baseball, the club will also have the ability to give Semien a qualifying offer next winter, which would either sign him up for another go-round at a similar price should he accept — the QO was $18.9 million this winter — or tie him to draft pick compensation if he declines and hits free agency.

On the flip side, Semien is simply betting on himself.

Put up big numbers in 2021 and he can try free agency again next winter, this time with some added defensive versatility to his name because the plan is for Semien to be the primary second baseman in Toronto.

He’s not a complete stranger to the position, having made 26 starts at the keystone over his first two seasons in the big leagues with the Chicago White Sox, the club that selected him in the sixth round of the 2011 draft out of the University of California.

Semien has also made 44 starts at third base, a position he could see time at this season when the need arises, in addition to being the primary backup behind shortstop Bo Bichette.

Analytics and positioning should turn the athletic Semien into a plus second baseman with the glove and give the Jays at the very least a pretty fun double play duo up the middle this summer.

As of today, that would leave Cavan Biggio at third base and Vladimir Guerrero Jr. at first, but Biggio’s extreme versatility gives the front office options, meaning they might not be done adding to the infield puzzle.

With at least one rotation arm needed and some bullpen depth, as well, the club’s off-season is far from over, but you can easily start to question how much money there is left to spend.

The current estimated payroll, per Roster Resource, sits at around $132 million.

While Blue Jays’ brass has given no indication where the upper threshold lies, there is reason to believe there’s flexibility built into budget scenarios based on the opportunities available to them.

Considering there are a number of quality free agents still available and not enough major-league owners willing to spend money, GM Ross Atkins and the front office might have the wiggle room to convince ownership to push even more chips into the centre of the table.

Even without doing that, there’s reason to believe the budget could go as high as $140 million, which leaves room for another free-agent addition, maybe a creative trade for a controllable player, or even some cost-cutting moves — you can pay half of Tanner Roark’s salary to pitch elsewhere — if that’s what’s needed.

After a slow start to the off-season, the Jays are suddenly one of the winter’s busiest teams.

Rotation aside, they’re one of the most improved, too.​