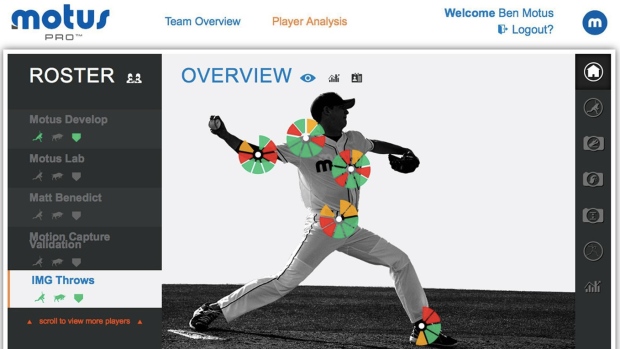 The sport's playing rules committee approved two devices for use during games this season, two people familiar with the decision told The Associated Press. The Motus Baseball Sleeve measures stress on elbows and the Zephyr Bioharness monitors heart and breathing rates.

In addition, the committee approved a pair of bat sensors for use on field during workouts, one from Blast Motion and the other from Diamond Kinetics.

The technology provides the potential for earlier detection of habits that could lead to injuries. However, the union is concerned about player privacy and how teams use the information. Both sides say further discussions are likely in bargaining this year.

People spoke about the decision on condition of anonymity because no announcements were authorized by MLB or the players' association. New York Mets general manager Sandy Alderson, chairman of the playing rules committee, declined comment.

The sleeve had been given provisional approval by the committee last year, but these are the first full consents for use of wearable technology. The committee includes Atlanta's John Schuerholz, Cleveland's Chris Antonetti, St. Louis' John Mozeliak, Minnesota's Terry Ryan and others.

Data from the devices cannot be transmitted during games but must been downloaded afterward. The iPads MLB approved for use by teams do not have Bluetooth wireless technology and no other electronic equipment is allowed in dugouts during games.

Clubs may use the data only for internal purposes, and it will be shared with the player. It cannot be provided to broadcasters or used for commercial purposes.

"Heart rate variability is an indicator of stress and can be used in developing post game recovery routines for high intensity players such as the starting pitcher rotations and catchers," said Steven Small, director of Zephyr performance systems.

The Major League Baseball Players Association, concerned about its member's rights, negotiated rules covering use of the technology. Veteran players could be reluctant to experiment with in-game use.

"The next thing you know, the pitcher's going to have a phone in his pocket taking selfies," New York Yankees outfielder Brett Gardner said.

New York Mets medical director Dr. David Altchek, an adviser to Motus, hopes the device can be used to help pitchers avoid Tommy John surgery and rehabilitate from the career-interrupting operation by monitoring valgus torque — stress on the elbow.

"Zack Wheeler, it's very hard to keep him below 85 per cent now," Altchek said last month of the Mets pitcher who had Tommy John surgery last year. "Even though it's his first couple days off the mound, he just wants to bring it, and we don't want him to bring it. If we had an absolute measure of him, we could say ... dial it down."