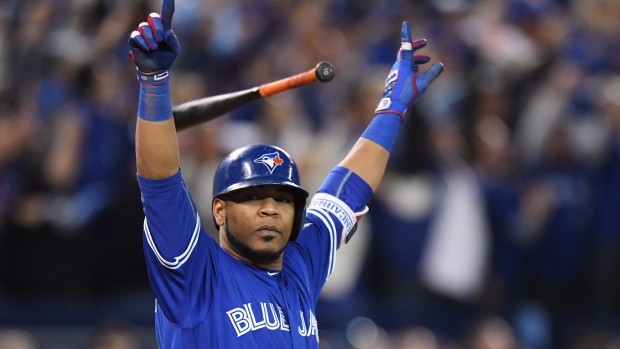 CLEVELAND — The Cleveland Indians swung for the free-agent fences and connected: Edwin Encarnacion is joining the AL champions.

Capping a year in which they came within one victory of winning the World Series for the first time since 1948, the Indians agreed to terms with the veteran slugger on a $60 million, three-year contract Thursday night.

The deal includes a club option for 2020 that, if exercised, would make it worth $80 million over four years.

The agreement is contingent upon Encarnacion passing a physical, two people familiar with the negotiations told The Associated Press. They spoke on condition of anonymity because the team had not made an announcement.

The physical is not expected until after the holidays.

One of baseball's most feared power hitters, Encarnacion had 42 home runs and 127 RBIs last season for the Toronto Blue Jays, who lost to Cleveland in the AL Championship Series. Over the past five seasons, he's averaged 39 homers and 110 RBIs in 145 games.

A three-time All-Star who also was pursued by Oakland this week, Encarnacion tied for the AL lead in RBIs this year and split time between designated hitter and first base.

Encarnacion, who turns 34 next month, reportedly turned down a four-year offer from Toronto worth at least $80 million before hitting the open market. The Indians swooped in and worked out a deal to bring in a player who could help put them back in position to end their championship drought.

Cleveland knocked off Boston and Toronto in the playoffs and jumped out to a 3-1 lead in the Series before the Chicago Cubs rallied to win in seven games and capture their first title in 108 years.

The close call convinced the Indians the time was right to spend, and they've shelled out money for one of the biggest bats available this winter.

Encarnacion's signing means the Indians will no longer pursue free agent first baseman Mike Napoli, who signed with Cleveland last winter and was a major part of the team's run to its first AL Central title since 2007.

Napoli reached career bests in homers (34) and RBIs (101), and finally gave Cleveland a much-needed power bat from the right side. He also provided clubhouse leadership, serving as a mentor to Cleveland's young players. However, he struggled in the post-season and the Indians were not willing to give him a multiyear deal. They did not give him a one-year qualifying offer of $17.2 million, either.

Encarnacion is an upgrade.

His departure from Toronto after eight seasons is a major move for Cleveland, which overcame injuries under manager Terry Francona to get to the World Series for the first time since 1997 and doesn't want to endure another long wait.

Already with one of baseball's best pitching staffs, the Indians now have a much more dangerous lineup. They've got young stars in second baseman Jason Kipnis and shortstop Francisco Lindor, and if left fielder Michael Brantley can bounce back from a shoulder injury that sidelined him for all but 11 games last season, the top of Cleveland's order is as good as anyone's.

It's a bold move by Indians owner Paul Dolan, who has been hesitant to test free-agent waters in recent years after major signings of previous veterans like Nick Swisher and Michael Bourn didn't pan out. But the Indians felt the time was right to act, especially with a bump in revenue from the 2016 post-season and adding new minority owner John Sherman.

Cleveland's lagging attendance — the Indians ranked 28th in the majors — will also get a big bump from Encarnacion's signing, which is being greeted by Cleveland fans as an early Christmas present.