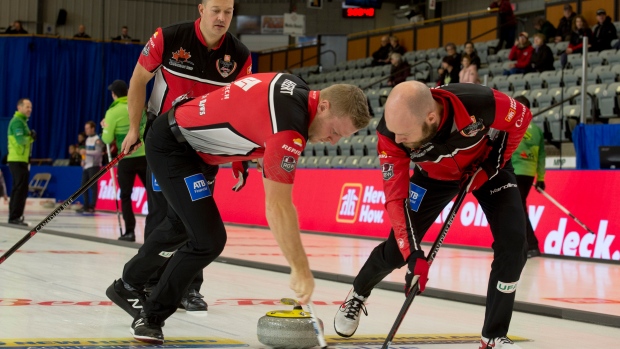 The 29-year-old has spent the past two seasons with Team Koe, winning his first Canadian championship in 2019 before settling for silver at the world championships.

Team Koe will be making a change at the second position going forward for next season. Colton Flasch has made great memories with us and ones we won’t forget, including a Brier win and world silver medal. Read more including a comment from Colton: https://t.co/HDWU5x4wbb pic.twitter.com/Y5X4a26anz

Flasch returned to the Tim Hortons Brier with Team Koe as the defending champions earlier this month, but finished outside of the playoffs.

Team Koe went 38-26 on the season and didn't win an event on the World Curling Tour.

"Colton Flasch has made great memories with us and ones we won’t forget, including a Brier win and world silver medal," Team Koe said in a statement. "We want to wish Colton all the best going forward in his curling career and thank him for the last two seasons. He wore the Alberta colours and Maple Leaf with pride."

“I wish the guys the best of luck for their remaining years and thank them for the opportunity they gave me. We won a Brier together and made great friends over the two years together,” he said.

Team Koe says they will have further lineup news in the future.