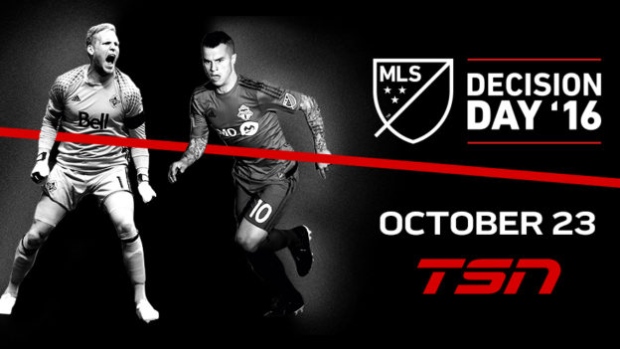 TORONTO – The MLS regular season culminates on Sunday, Oct. 23 with MLS Decision Day, the final step on the road to the MLS Cup Playoffs. As the home of the beautiful game, TSN delivers exclusive live coverage of Toronto FC and Vancouver Whitecaps FC in their final games of the regular season.

On MLS Decision Day, every team in the league plays its final game of the regular season simultaneously, to battle for playoff positioning and set the matchups for the upcoming MLS Cup Playoffs.

Calling all the action from the Toronto FC vs. Chicago Fire game are MLS on TSN play-by-play commentator Luke Wileman and analyst Greg Sutton.

Host Vic Rauter and TSN soccer analyst Kristian Jack broadcast live from the TSN Studio to deliver frequent updates on the Montreal Impact, who are looking to secure home field advantage in the Knockout Round of the MLS CUP PLAYOFFS, as well as news, highlights, and updates on key goals from around the league in this dramatic finish to the MLS regular season.

The network’s live coverage of MLS Decision Day is also available live and on demand to TSN subscribers via the TSN GO app.