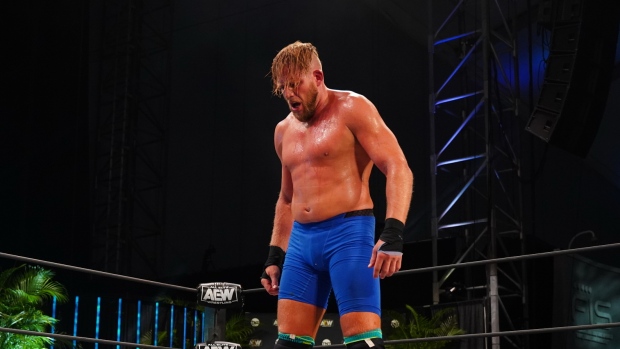 Wardlow has accepted Jake Hager's challenge to step into his world of mixed martial arts and the two behemoths will do battle in a cage fight on AEW Dynamite. ​You can catch AEW Dynamite at 10pm et/7pm pt on TSN2, the TSN app, streaming on TSN Direct and on TSN.ca.

MMA rules cage fight: Jake Hager (w/ Inner Circle) vs. Wardlow (w/ The Pinnacle) - The next phase of the bitter feud between these two warring factions won't be taking place in a regular match, but in a cage. The question is, did Wardlow bite off more than he can chew? The Pinnacle's monster is fearless, yet mixed martial arts is Jake Hager's world and not his. A former collegiate wrestler at Oklahoma, Hager's transition into the world of MMA has been a successful one, thus far. In his four fights with Bellator, Hager has won three with the fourth going to a no-contest. Most recently, he defeated Brandon Calton by split decision last October. So Hager clearly has the experience advantage, but can "Mr. Mayhem" be counted out? In their only singles bout to date, Wardlow was victorious this past January and is undefeated in singles competition since an October loss to "Hangman" Adam Page. Will Wardlow make it two in a row over Hager or will the Inner Circle's "Bigg Hoss" make him regret agreeing to step into the cage?

Six-man tag-team match: The Elite (Matt Jackson, "Machine Gun" Karl Anderson and Doc Gallows) (w/ Don Callis) vs. Eddie Kingston, Frankie Kazarian and Penta El Zero M - This match was born out of the finish of last week's six-man tag. The team of Kingston, PAC and Penta were victorious over the Young Bucks and Brandon Cutler, but the numbers game caught up to the victors after the match when the Good Brothers hit the ring to beat down the winning trio. Still incensed over the Jacksons' cheating that led to the split up of SCU, the newly christened "Elite Hunter" Kazarian ran down to even the odds. What we're left with now is an extremely combustible situation with these six men, which is liable to spiral out of control at any given minute. A win would be nice for both teams, but it would appear that inflicting damage on the other side is a bigger priority than picking up a victory. What physical toll will these six men pay in this latest escalation of a simmering feud?

2-on-1 handicap match: Men of the Year ("All Ego" Ethan Page and Scorpio Sky) vs. Darby Allin - Like Wardlow, Darby Allin might be putting pride ahead of common sense on Friday night. After Page and Sky issued a challenge for a tag match against Allin and a partner of his choosing, Allin made a bold choice last week: He agreed to the match, but decided to go it alone and take on the two men who have been thorns in his side for weeks all by himself. Allin also made it very clear to an understandably concerned Sting that he didn't want him there for this match. Reluctantly, Sting agreed, leaving Allin all by himself to take on two men who would love nothing more than to embarrass the former TNT Champion on Friday night. Can Allin somehow pull of the upset or will Page and Sky humiliate their longtime rival?

The Nightmare Family ("The American Nightmare" Cody Rhodes and Brock Anderson) (w/ Arn Anderson) vs. The Factory (QT Marshall and Aaron Solow) (w/ Nick Comoroto) - Friday night's Dynamite will give us the first look at the scion of a pro wrestling legend when Brock Anderson, the son of "The Enforcer," makes his AEW debut, teaming up with Cody Rhodes to take on QT Marshall and Aaron Solow. While we don't know much about the younger Anderson, we do know a couple things, namely that he looks exactly like his father and that he doesn't seem fazed by being in the spotlight. We saw this last week when Brock took down Marshall with aplomb and proceeded to pepper him with several hard shots. As the enmity between the Nightmare Family continues, can Rhodes and his young charge pull out a win in his debut or will Marshall and Solow be able to take advantage of inexperience to get one over on their foes?

"Freshly Squeezed" Orange Cassidy (w/ Best Friends) vs. Cezar Bononi (w/ The Wingmen) - The Wingmen seem to have taken a liking to Orange Cassidy in recent weeks. Well, sort of. Bononi, JD Drake, Ryan Nemeth and Peter Avalon want Cassidy to ditch his friends to join them, but have also made it clear they think he dresses like a child and is completely swagless. Perhaps the thinking here is that by defeating Cassidy, Bononi and the Wingmen can show him what he's missing. But don't count on it. Cassidy and Best Friends seem thoroughly unimpressed by this foursome and all Cassidy is looking forward to is another victory to get him on track for another shot against AEW World Champion Kenny Omega. Can Bononi prove a point to Cassidy or will Freshly Squeezed get right back in the win column?

"The Bad Girl" Penelope Ford vs. Julia Hart (w/ Varsity Blonds) - Penelope Ford returns to action on Dynamite for the first time in nearly two months and for the first time since Miro put her husband, Kip Sabian, on the shelf with a brutal beating. A lot has changed in the AEW women's division since we last saw Ford with Hikaru Shida's reign on top of it over and Dr. Britt Baker, DMD its' new champion. To work her way up the rankings and put herself in line for a shot at Baker, Ford will first have to get through Hart, one of AEW's youngest competitors. The Varsity Blonds' cheerleader, Friday night's match will only be her second on Dynamite, having fallen to Baker last month. At only 19, a victory over the much more experienced Ford would be quite the feather in the cap for Hart. Will Hart pull off the biggest victory of her young career or will Ford put the women's division on notice that the Bad Girl is back?

- Jim Ross sits down with one of AEW's newest arrivals, Andrade El Idolo