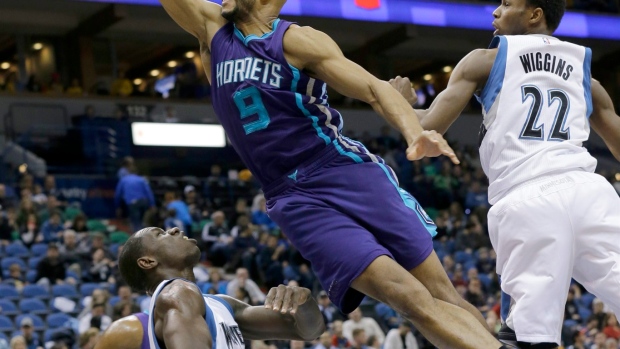 So the veteran guard called it "just another game." To the Charlotte Hornets, it was much bigger.

Williams scored 24 points to lead the Hornets to a 109-98 victory that moved them back into playoff position in the Eastern Conference.

"It wasn't one of those situations where you want to go back and have a good game," Williams said. "It was more just a game that we really needed to win."

Michael Kidd-Gilchrist and Al Jefferson each added 18, and Gerald Henderson had 17 as the Hornets snapped their three-game skid. For a night anyway, the win moved the Hornets ahead of Boston for the eighth spot in the East.

Staying there, though, won't be easy. The Hornets travel with their 14-20 road record to Chicago on Monday night.

"We're going to have to do it for more than 24 minutes to win there," coach Steve Clifford said. "The locker room felt good. We needed to win a game, especially on the road, and hopefully we can build on it."

Gorgui Dieng led Minnesota with 16 points and Kevin Martin had 15 points and nine assists. The Wolves led the entire first half.

"It's one of those things you play with a lot of energy in the first half, the worst thing that happens, you go into halftime you get a tendency to all of a sudden sit down and you realized, 'Geez, I'm really tired,'" coach Flip Saunders said. "We didn't come out with that same energy, the same pace."

His team trailing by as many as 13 in the first half, Williams provided a spark off the bench with his smooth shooting, just as he did in many of his 41 games with the Timberwolves this season. He shot 10 for 16 from the floor in his first game at Target Center since the Wolves traded him to Charlotte on Feb. 10.

"Just one of those games of Mo, where any time he gets a close look, open look, any type of look, it's going to go in," Chase Budinger said of his former teammate.

Williams, who had a 52-point game for the Wolves this season, has scored in double figures in 14 of the 16 games he's played for Charlotte since the trade.

Kidd-Gilchrist helped key a 24-6 run spanning the second and third quarters that helped put Charlotte in front for good. Henderson and Kemba Walker combined for 12 points during the spurt. Walker finished with 16 points.

Hornets: Kidd-Gilchrist went 8 of 10 from the floor, his highest field-goal percentage of the season. He had been shooting just 35.7 per cent (15 of 42) over his previous four games. ... Walker went a season-high 8 for 8 from the free throw line. ... Charlotte committed only eight turnovers. The Hornets lead the NBA in fewest turnovers per game this season (12).

Timberwolves: G Gary Neal, who came to Minnesota in the Williams trade, scored 11 points against his old team but left early in the fourth quarter with a sprained left ankle. Neal joined a long list of Wolves players out with injured ankles, including Nikola Pekovic, Ricky Rubio and Anthony Bennett. "No team has had more bad luck than these guys have," Clifford said of the Wolves. ... Kevin Garnett missed his sixth straight game with a sore left knee. ... The team held a brief pregame ceremony to celebrate Andrew Wiggins' fourth consecutive Rookie of the Month honour. Wiggins finished with 13 points.

Rookie Adreian Payne had 13 points on 6 of 8 shooting, including several nice mid-range jumpers. "I don't know if he's played his 20th game in the NBA yet, when you put all those things in consideration you've got to feel good about where he's at," Saunders said.

Hornets: At Chicago on Monday.

Timberwolves: At Utah on Monday.