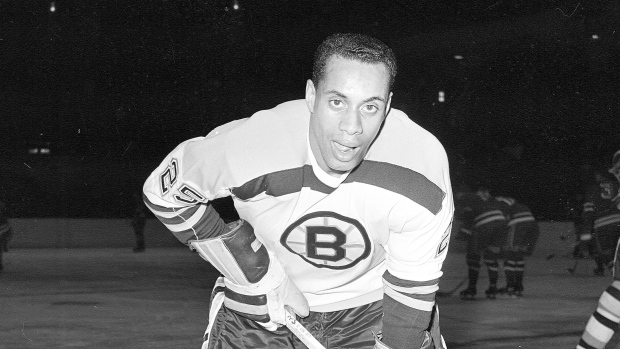 FREDERICTON — There's growing momentum in a push by friends and fans of Willie O'Ree to have the groundbreaking hockey player inducted into the Hockey Hall of Fame.

In January, ceremonies were held to mark the 60th anniversary of when O'Ree stepped onto the ice as a member of the Boston Bruins, becoming the first black player in the National Hockey League.

Brenda Samson, a friend in O'Ree's hometown of Frederic ton, said the anniversary sparked the effort to see O'Reye inducted into the Hall of Fame as a builder.

"I think the idea originated with all the celebrations taking place in Boston. There was a lot of press coverage," she said.

O'Ree's first game with Boston was in a 3-0 win over the Canadians in Montreal, but he didn't know the significance until reading a newspaper the next day that said he had broken the NHL's colour barrier.

He would play just one more game with the Bruins that season.

"There was a slapshot, and I'm on the ice in front of the net. A ricochet came up and the puck struck me in the eye. I lost 97 per cent vision in my right eye. I was out of action for about six weeks," he said.

Following his stint within the Bruins, O'Ree played in other leagues for teams in Ottawa, Los Angeles and San Diego — where he continues to live.

"There are so many reasons why Willie O'Ree deserves to be in the Hockey Hall of Fame. The reach that Willie has had in the world of hockey is beyond measure. He has reached not only black hockey players and players of colour but he has reached so many young people through the diversity program and the Hockey is for Everyone program. He has literally reached thousands of children through hockey," said Samson.

Reached at his home in California Friday, O'Ree told The Canadian Press that he would be thrilled if he makes it into the Hall of Fame.

"If I go in I probably wouldn't go in as a hockey player because I only played 45 games in the NHL, but as a builder, there's the work that I have been doing with the National Hockey League and the Hockey is For Everyone program since 1996," he said.

Samson said she's getting a flood of letters in support of the nomination, including one from Karl Subban, whose five kids include sons P.K. (Nashville Predators), Malcolm (Las Vegas Golden Knights) and Jordan (AHL Utica Comets).

"Willie stepped on the ice with the Boston Bruins in 1958, the year when I was born, and made hockey history. He is a pioneer and a trailblazer. Willie achieved in the face of adversity. He changed the game and he changed society and he changed minds," Subban wrote.

"Willie O'Ree's story must not be forgotten. He has made it possible for my boys to have the NHL dream and to believe they could achieve it. He changed hockey which is now for everyone. Hockey needed him and so does the Hockey Hall of Fame. The time is right!"

Mike Eagles, director of athletics at St.Thomas University and a player in the NHL for 16 seasons, has also written in support of the nomination.

"Willie loved hockey so much that it helped him deal with and overcome all the challenges and racism he faced during his life and hockey career," Eagles wrote.

"Mr. O'Ree is someone we can all look up to and thank for all he has done for the game of hockey."

Samson said she has also received letters from politicians, and even children who have received advice from O'Ree.

The lobby of Fredericton City Hall will be open March 5-9 to gather signatures and comments.

Samson said it's only the start of a detailed selection process.

It will be June before it's known if it passes the selection process.

"I just have to wait and see. If it happens it happens," O'Ree said.