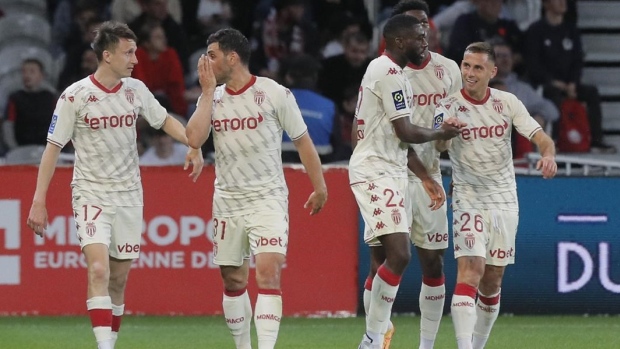 Monaco heads into the last two games of the French league on an eight-game winning streak and with a chance to secure Champions League soccer next season.

Monaco is in third place, which assures a place in next season's qualifying rounds, and hosts mid-table Brest in Saturday's full round of games.

Clement is wary of playing a Brest team that beat Monaco 2-0 at home and admires its style of play.

“Brest it playing without pressure, they still have ambitions to finish in the top 10,” he said. “They play with a lot of speed and impact, they are well organized. We'll have to stay focused.”

Marseille is three points ahead in the second spot and the automatic Champions League place but still has a harder-looking trip to fifth-place Rennes.

Marseille's task is made even harder by the fact it's without playmaker Dimitri Payet and several other injured players.

Furthermore, Rennes is chasing fourth place and a Europa League spot and needs a win to pressure Nice, which is one point ahead of Rennes and hosts a mid-table Lille side with nothing to play for.

The momentum is with Monaco, which hired Clement from modest from Belgian side Club Brugge on a 2 1/2-year deal after firing Niko Kovac during the midseason break.

The club was stagnating in sixth place and Kovac's methods were not working.

Even though the former Bayern Munich coach steered Monaco into third last season, thanks to a long unbeaten run, Monaco started this campaign with one win from six league games.

Kovac never recovered his confidence, the team appeared disjointed and was no longer playing attractive soccer.

So Monaco turned to Clement, who had impressed in Belgian soccer with his strong emphasis on attacking play and a penchant for lightning-fast transitions from defense to attack.

Even though he was a defender during his playing career Clement always had an eye for goal — netting 45 in 333 games with Club Brugge. He took charge of Brugge in June 2019 and won two Belgian league titles to make it three in a row, after winning with Genk the previous season.

Still, it seemed a risky move bringing him to Monaco — which won the league and reached the Champions League semifinals in 2017 — and tasking him with dragging the club back into Europe's elite competition right away.

Eyebrows were raised further when Clement won only three of his first nine league games. During that complicated spell, there were also two 0-0 draws and his team was held 1-1 by Bordeaux — which has been leaking goals all season.

So much for the attacking soccer he was supposed to bring.

Questions were asked whether his methods suited the team and why he was putting prolific scorer Wissam Ben Yedder on the bench for some games.

But his fortunes turned when Monaco faced Paris Saint-Germain on March 20.

Ben Yedder scored twice in a dominant 3-0 win and rekindled a partnership with German forward Kevin Volland that worked so well last season, when they combined for 36 league goals.

Ben Yedder also netted in a crucial 3-2 win at high-flying Rennes. The France forward has six goals during Monaco's eight-game winning run to reach 21 league goals — one more than last season and three behind top scorer Kylian Mbappe of PSG.

France midfielder Aurelien Tchouameni, reportedly close to agreeing a move to join Premier League powerhouse Liverpool in the offseason, has also found his best form for Monaco at the right time.

But while Marseille continues its scrap for second place, it's a far bleaker story for six-time champion Bordeaux, which will be relegated if it loses at home against Lorient.

Bordeaux is one of France's most storied clubs and has also won four French Cups and three League Cups.

The southwestern club was on the verge of bankruptcy last year and this season has been equally chaotic.

Bordeaux has conceded the most goals in the league with 89 and, to make matters worse for fans, the team lost at home to Marseille for the first time in 44 years.