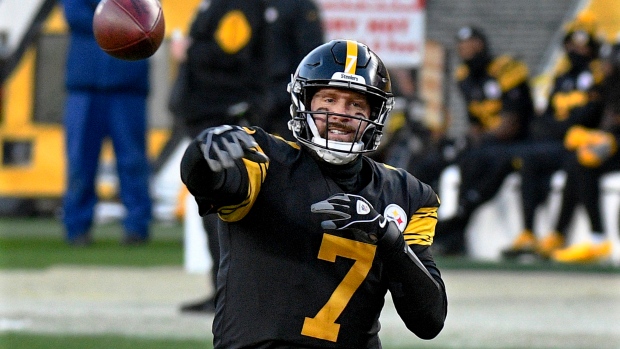 Week 17 wraps up with the final Monday Night Football game of the season tonight on TSN.

All indications are that it will also mark the end of an era in Pittsburgh.

The Steelers, at 7-7-1, need a win to keep their playoff hopes alive in what should be Ben Roethlisberger’s final game at Heinz Field.

The future Hall of Famer is expected to retire at the end of the season, and even if Pittsburgh miraculously makes the playoffs, they won’t play another home game until next season.

Meanwhile, at 7-8, the Cleveland Browns have already been eliminated from postseason contention, but they still have an opportunity to play spoiler against their AFC North rival.

The number for tonight’s game has moved significantly since it opened.

At one point, the Browns were as high as a 3.5-point favourite, but as of this morning that number has settled at Pittsburgh -2.5.

For the Steelers to reach the postseason, they’ll need wins over both the Browns and the Baltimore Ravens in their season finale.

In addition to winning out, Pittsburgh will also need the Indianapolis Colts to lose to the Jacksonville Jaguars, and have the Las Vegas Raiders and the Los Angeles Chargers, which currently occupy the seventh and eighth seed in the AFC, not tie when they meet in Week 18.

That’s a lot of things that they need to go right. ESPN’s playoff predictor currently gives Pittsburgh a 4 per cent chance to make the playoffs.

If this is Big Ben’s final home game, he couldn’t have picked a more perfect opponent. Roethlisberger is 25-3-1 all-time versus the Browns, with 42 touchdown passes.

Pittsburgh is 28-5 at home all-time on Monday Night Football and has won 19 straight MNF games at Heinz Field. The Steelers have also beat Cleveland 17 straight times at home during the regular season, although the Browns did win at Heinz Field in last year’s wild-card round.

"I don’t ever speak in guarantees, but signs are pointing that this could be it." (via @Teresa_Varley) pic.twitter.com/uEcoeoC4fD

The Steelers upset Cleveland earlier this season on Halloween night, winning 15-10 on the road as a five-point underdog. They’ll be looking to complete the season sweep of the Browns for the 14th time since 1999.

The biggest mismatch in this game is in Cleveland’s favour. The Browns are one of the top rushing teams in the league, and Pittsburgh ranks last against the run.

The Steelers are coughing up a league-worst 142.7 rushing yards per game, which must be music to Nick Chubb’s ears. Chubb entered the week third in the NFL in rushing, despite sitting out three games.

Last week, Chubb and the Browns ran all over Green Bay to the tune of 219 yards. With how shaky Baker Mayfield has looked all season, they would be wise to keep the ball in Chubb’s belly.

Mayfield has thrown more interceptions (seven) than touchdowns (six) over his past four starts and has been held under 250 passing yards in 11 of his last 12 outings.

An added benefit to the Browns deploying a run-heavy approach is that it slows the game to a crawl. Cleveland ranks 27th in plays per game this season, which brings the under on Monday Night Football squarely into play.

Three of the past four regular-season matchups between these two teams have failed to eclipse the total, while their first meeting this season fell 18 points shy of the number.

Pittsburgh is averaging just two points per game in the opening half over its past five contests, while Roethlisberger hasn’t thrown a first-half touchdown in well over a month. It’s hard to get involved in a shootout if you wait until the final 30 minutes to find the end zone.

As far as a picking a side goes, consider the following: Not only is it Roethlisberger’s swan song at Heinz Field, but the Steelers are also notorious ATS crushers as underdogs.

Meanwhile, the Browns are 1-9 against the spread in their last 10 divisional games under Kevin Stefanski.

I’ll take my chances with Pittsburgh on the money line and bet the under in the final Monday Night Football contest of the regular season.