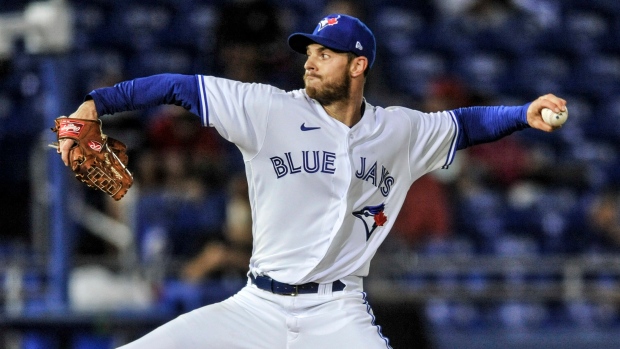 TORONTO — This is what baseball fans in Queens saw in flashes.

Over his six years with the New York Mets, Steven Matz proved he could get major-league hitters out as a starting pitcher, but the issue became doing it consistently.

Whether it was start to start, month to month, or year to year, Matz’s talent teased before the Mets finally gave up, trading the 29-year-old lefty to the Toronto Blue Jays in January.

Armed with a fresh start and a new voice in his ear, Matz, including spring training, has looked outstanding in a Jays uniform for more than six weeks now, compiling a 1.47 ERA so far in three April starts that count.

“He’s not scared to throw any pitch at any time — and that’s key,” said that new voice, Jays pitching coach Pete Walker. “Anytime you’re pitching in the major leagues when you rely on one pitch to get you out of a jam, it can be difficult. Especially if that pitch isn’t there.”

For Matz, his sinker and changeup do most of the work, and it’s been a complete 180 for both of those pitches in 2021.

After both of those offerings allowed slugging percentages in the .680 range last summer, they’ve been dominant across 18.1 frames this season.

Matz’s sinker has held batters to a .128 batting average and a .154 slugging percentage, while his changeup has limited hitters to a .063 average.

Getting ahead, commanding the fastball, and then mixing in his changeup, curveball and cutter have been the keys to Matz’s efficient start.

“I think as long as he stays unpredictable, he’s going to be tough to hit,” Walker said.

A free agent this winter, Matz could position himself nicely with a healthy and consistent campaign from start to finish.

So far so good.

“It’s fun to get in a groove early on in the season, especially when you’ve got a lineup like this [behind you],” Matz said. “I’m just trying to build off each start and take a little bit from each start and try to get better every time out.”

There’s a decent chance George Springer makes his long-awaited Blue Jays debut Friday at Tropicana Field against the Rays. Coming off an oblique injury and recently slowed by a quad issue, Springer has been running and taking hacks in the cage, but the Jays are playing this safe. With a day off Thursday, Springer will have missed 18 games if he’s able to return Friday night … Teoscar Hernandez, who hasn’t played since April 8 due to a positive COVID-19 test, could also return later this week if he clears MLB protocols. Hernandez has been feeling better over the past few days after initially dealing with some moderate virus symptoms … It’s still going to be a while — likely into the month of May — but Nate Pearson (groin) is building back up in Dunedin and focusing on fastball command, which means he’s essentially still in the early stages of spring training … His bullpen has been torn apart by injuries over the past week, but Walker had some good news Sunday, saying Jordan Romano (ulnar neuritis in right elbow) should be able to return from the IL when first eligible April 25 … Tyler Chatwood (right triceps strain) should be back soon, too … The outlook is not as positive for righty Julian Merryweather, whose oblique strain may cost him a good chunk of time … Starter Ross Stripling (flexor strain) is currently without a timeline … Every AL East team has had its issues early on this season, but the New York Yankees’ rotation (aside from Gerrit Cole) has to be the biggest concern. Corey Kluber has yet to find his form and Yanks’ starters have pitched to a 4.74 ERA, 21st in baseball.

All eyes were on Vladimir Guerrero Jr.’s launch angle heading into 2021 and, well, things are looking up.

Not only has Vladdy Jr. continued destroying baseballs in terms of exit velocity to sit 11th league-wide with an average of 94 mph off the bat — Aaron Judge leads the way with a 98.2 mph average exit velo — he’s also been lifting the ball a lot more, evidenced by his 39.5 per cent ground-ball rate, which is under the league average of about 43 per cent.

Even if it looks like a small sample size as of today, there’s no other way to say it: Guerrero Jr. is putting it all together at the plate. Through 16 games, Vladdy is one of five players across baseball who has been worth more than a full win already, sitting tied for second with Mike Trout at 1.2 fWAR, behind only Ronald Acuna Jr. (1.6).

“How do you expect the playing time behind the plate to take shape over the next few months?”

ANSWER: When you stack up Danny Jansen and Alejandro Kirk, it’s very easy to see a stark difference in skills.

Jansen has the trust of both the coaching staff and the pitching staff to throw down the right signals and control the running game, while the 22-year-old Kirk is still working on those aspects.

At the plate, however, it’s clear Kirk is the superior option and Jansen is once again struggling with the bat, slashing just .071/.161/.107 through his first 11 games.

This backstop situation is a case of pick your poison and most managers will usually lean towards the responsible defensive option, something even easier for Charlie Montoyo to do with a healthy lineup surrounding Jansen.

The Jays will ride with this duo for a few months, but don’t be surprised if the front office at least kicks the tires on potential upgrades as the July 30 trade deadline approaches.

INF Santiago Espinal, taxi squad: Coming off a good spring, Espinal was recalled as the 27th man for Saturday’s double-header and continued to contribute in various ways, especially with the glove and his ability to play short or third. He’s valuable insurance.

LHP Travis Bergen, taxi squad: The lefty will be riding the shuttle back and forth from the alternate site/Triple-A all season long.

RHP Joey Murray, alternate site: With the minor league season slated to get going May 4, keep an eye on Murray’s starts because he’s going to get a look in the major-league rotation at some point if he pitches well.

C Reese McGuire, alternate site: Once Triple-A gets going, Riley Adams will likely assume an everyday role there, with McGuire, who’s now off the 40-man roster, joining the taxi squad as emergency depth.

The 25-year-old native of Brooklyn, N.Y., was going to get a chance at some point this season, but the call came earlier than expected when Teoscar Hernandez tested positive for COVID-19.

With the veteran right fielder joining centre fielder George Springer on the injured list, Palacios was afforded an opportunity that he’s taking advantage of in a modest way, slashing .292/.379/.292 and collecting seven singles over his first 30 big-league plate appearances.

Even though Palacios isn't the tooled up type and how much power the left-handed hitter can get to will be something to watch, he’s well-rounded and the approach at the plate has been impressive.​