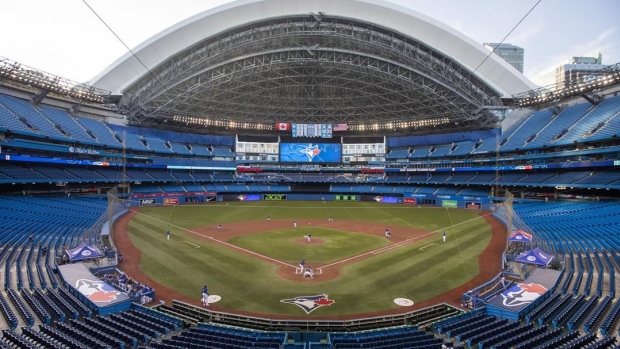 TORONTO — It’s absolutely no secret that the closed border has been what’s preventing the Toronto Blue Jays from a normal life of playing games inside Rogers Centre.

It continues to be the key variable in their attempt to return. The reason is there are still the same stumbling blocks as last summer when it comes to any sort of proposed exemption that would ask not only Jays players and their families but visiting teams to quarantine inside the hotel/stadium space.

It would be the same type of proposal to the federal government this summer, with many issues, layers and politics still at play.

Make no mistake, there’s only one more move coming. It’s Buffalo to Toronto and a return to normalcy.

The timing of that, however, is a dart throw at a moving target and it’s all day by day.

Jays president/CEO Mark Shapiro laid the obvious way his franchise could make their final move, one that he said will take about a month to get mobilized and finalized when they do get clearance to return to Toronto.

“Just focus on the border, recognizing anything around that’s going to be a challenge,” Shapiro said last week. “Not impossible, but a challenge. The only clarity exists around the border being open.”

The Jays continue to touch base and talk with all three levels of government, but the concerns some players had last summer — notably Travis Shaw, who is no longer on the team — are still something the club would have to satisfy if, in fact, a workaround somehow emerges prior to the border simply reopening.

“Any proposal would have to deal with that and create a set of circumstances that allows cross-border travel for players, families and visiting teams,” Shapiro said. “That is not an easy thing to do. It’s not impossible, but it’s not an easy thing to do. What I would suggest to you is that, until the border is open, there are significant challenges with us returning to Toronto to play.”

The recent NHL exemption isn’t comparable, with it being one team and minimal games.

There are 12 visiting teams scheduled to play the Jays over the next four months and the MLBPA would have a host of questions regarding those players and the protocols that would be imposed on them.

Prime Minister Justin Trudeau recently mentioned a Canadian vaccination rate of 75 per cent for a potential border opening, but that’s just one of many variables that will factor into that big decision.

Now 11 months into playing baseball in a pandemic — summer camp got underway at Rogers Centre last July — a lot has been learned, a lot has been sacrificed and at this point it’s just a waiting game at Sahlen Field, where the Jays are now selling tickets through their July 19-21 homestand.

Without some sort of unexpected curveball, those are the options.

At 30-27, toiling inside the best division in baseball, the Jays have given themselves a chance up to this point with an imperfect roster. In 2016, the last time the club made the postseason, they started with the exact same 30-27 record, while the 2015 team got to three games over .500 for the first time on June 13 at 33-30 … Randal Grichuk’s season isn’t getting enough attention and the 29-year-old veteran might be even better with a handful less at-bats when George Springer finally returns. He might not agree with that, but he’s a great fourth outfielder — he better be for $10 million a year — and one who will still see a significant amount of playing time … Per the club’s PR department, the Jays will officially reach the 85 per cent vaccination rate as of today, which will ease some of the strict clubhouse protocols and give players and coaches a bit more freedom. About two-thirds of MLB clubs have now reached that threshold … Julian Merryweather is eligible to return from his oblique injury next week, but GM Ross Atkins said the right-hander might need some more time. It’s impossible to count on Merryweather, but his power arm shifts the dynamic of the bullpen in a hurry when he’s right … Speaking of 60-day IL players, catcher Alejandro Kirk is progressing from his hip injury but isn’t eligible to return until Canada Day, anyway.

That’s the combined fWAR between Vladimir Guerrero Jr., the MLB leader at 3.5, and Marcus Semien, who’s seventh amongst position players at 2.8.

The next closest duo is the Cincinnati Reds’ Nick Castellanos and Jesse Winker at a combined 5.4 fWAR through the first two months and change of the season.

For Vladdy, it’s a giant leap in terms of overall value, as he was worth a total of just 0.6 fWAR through his first two seasons, a total of 183 games.

Now, he’s a superstar and an MVP candidate, one that might be in the Mike Trout bucket soon, where even missing the postseason might not matter because the numbers are that good.

Semien, meanwhile, is absolutely earning his $18 million salary — and earning himself some more on the free-agent market this winter in the process — and is already posting the third most valuable campaign of his career, trailing only 2018’s 3.9 fWAR performance and the 2019 monster year of 7.6 fWAR that the Jays’ front office was dreaming of when they inked him in January.

“It’s been extremely encouraging to see the energy he has on the field, how excited and encouraged he is by being back to baseball activity and recovering well, responding well, obviously, he’s moving around very well. I guess I would say is all of the feedback we’re getting from our medical staff and George is extremely encouraging. I think it’s just with him making that determination (of when he’s ready to go on a minor-league rehab assignment). We are very close to that being the next piece to the equation.”

— Atkins on the status of George Springer’s quad injury

C Riley Adams, Triple-A: Danny Jansen suffered a hamstring strain Sunday and Adams is the next man up. He’s also hot, going 5-for-8 with three homers over the weekend.

RHP Thomas Hatch, Triple-A: The righty returned from a brief side muscle setback to throw two scoreless innings. They’ll likely build him up as a starter, but a bullpen need could change that plan.

RHP T.J. Zeuch, Triple-A: Zeuch threw seven strong innings, allowing just one earned run, behind Hatch on Sunday. He should be groomed for that bulk role.

LHP Anthony Kay, Triple-A: Now fully recovered from a minor blister issue, the lefty needs to tighten up the command and a regular turn in the Bisons’ rotation is probably the best way to help fix that.

RHP Nate Pearson, Triple-A: This is a very good example of how hard it is to transition from the minors to the majors as a starting pitcher. He’s still lighting up the radar gun, but Pearson walked two, hit two, threw one wild pitch, and allowed five earned runs over four innings in his latest start on Friday. Like Kay, a regular turn and some consistency is extremely important right now.

The 2020 fifth-overall pick has appeared in this space a couple times now, with the last update coming two weeks ago at the 10-game mark of his pro debut.

Then, he was still searching for his first professional homer and generally just off to a pretty quiet start.

The past 10 games have been a bit of a different story, however, as Martin has popped two home runs in a four-game span and also hit a pair of two-baggers to more than double his extra-base hit output on the young season.

Martin alluded in the spring to both swing adjustments and getting stronger in order to tap into more power, something Atkins touched on Sunday.

“He has really embraced not just resting on his laurels or thinking what I’ve done will be good enough. He’s embracing how can I be even better and how can I get stronger and be more powerful while sticking with my approach, which we’re seeing,” Atkins said. “He’s had a good approach, he’s trying to get to more power and he’s looking to make adjustments and the defensive challenges he had in spring training, he’s really worked on. He’s been really consistent as a defender. Really impressed with just his overall professionalism.”