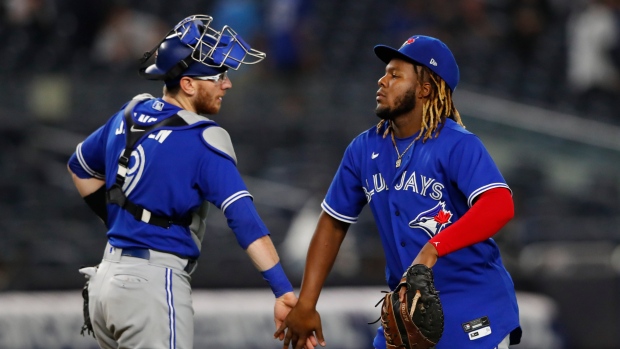 With a third of the Toronto Blue Jays’ schedule in the books, we’ve learned a lot through 52 games, but to see them sitting two games above .500 as a competitive yet imperfect ball club is not surprising.

The lineup is really good — and will be even better whenever George Springer is finally ready to return — and the pitching has been capable enough to keep them hanging around the top of the standings in what’s turned out to be a deeper-than-expected American League East race.

In other words, far from a perfect start, but keeping up with the pack and not getting buried in the standings is goal No. 1 in the first half of the season.

With all that being said and the Jays in a not-so-unexpected spot two months in, here are five things we’ve learned since the first pitch of the season was thrown way back on April 1.

He’s without a doubt in the way-too-early MVP conversation and he’ll probably stay there for, oh, the next 10 years or so.

2. Runs won’t be the problem

As all of us expected, this team can score.

Averaging a shade over five runs per game, the Jays own the fourth-most potent offence in baseball, behind only the Astros (5.3), Dodgers (5.2) and Red Sox (5.1).

As all of us expected, this team still needs starting pitching.

But that’s not to say things haven’t been positive on that front through two months.

Robbie Ray and Steven Matz have both proven they’re solid, if inconsistent, rotation arms, with a little bit of strikeout ceiling to boot.

Hyun Jin Ryu has been as good as ever, while Alek Manoah pushing his way into the conversation this early is simply a bonus.

Even with all that going the Jays’ way, a legit No. 2 starter is by far the biggest need ahead of the July 30 trade deadline.

4. The bullpen probably needs help, too

The bullpen saved this team through the first month of the season, but the wear and tear started to show up in May and it’s reasonable to expect that at the very least depth is something GM Ross Atkins will be looking for over the next few weeks.

5. The front office will be aggressive

What more proof do you need?

From the Springer signing to an aggressive assignment and early-season promotion for Manoah, the all-in approach from the front office is clear.

Their level of aggression in attacking the pitching market at the trade deadline is expected to match that, and at this point it would be a huge disappointment if the Jays didn’t make that long-expected major move that ships out a top prospect or two.

With the books closed on May for the Jays, FanGraphs is giving them a 45.6 per cent chance to make the postseason. That’s fine and all, but they still have lower odds than three other teams within their own division … Even though this bullpen situation might never allow for a traditional, old-school closer, Jordan Romano is starting to stake claim to the job as things fall back into place following an array of injuries. He struck out 19 across 13 innings in May and finished out the month with saves in his final two outings … Speaking of high-octane bullpen arms, Julian Merryweather (oblique) is on his way back and on track to rejoin that late inning mix in mid-June. With David Phelps done for the season after having surgery on his own lat injury, Merryweather is more important than ever. At this point, however, all you can do is cross your fingers and hope he stays off the IL … All eyes will be on Manoah’s second-career start Wednesday in Buffalo against the Miami Marlins as the 23-year-old attempts to stake claim to a permanent rotation spot. A couple more starts like his debut and you can write his name in pen, ideally between lefties Ryu and Ray … Expect some Springer news this week. The star centre fielder has been doing outfield drills while with the team on the road and he could be ready to begin a rehab assignment soon.

As the Jays shift from TD Ballpark in Dunedin to Sahlen Field in Buffalo starting Tuesday, one thing is very clear: They’re leaving an offensive haven.

Both teams reaped the benefits, but the ballpark was playing like Coors Field East during the 21 games the Jays played at their spring training home, averaging nearly 11 runs per game.

The good news is that the Jays are a potent offensive team no matter where they play, and Sahlen Field was pretty hitter friendly last summer, too.

“I think those first four pitches were the most nervous, or most excitement, I had all day. Then after those four, it was just like, ‘I don’t want to suck. Let’s lock it in right here and let’s start pitching. Forget everything else, we have to pitch.’”

—Manoah on his mindset after walking D.J. LeMahieu to start his MLB career

What changes were made to Sahlen Field in Buffalo from last season?

ANSWER: After making some temporary changes to Sahlen Field before arriving there last August, the Jays have made more extensive — and permanent — changes to the ballpark over the past few months.

The biggest thing you’ll notice is the bullpens are no longer on the field, now safely tucked away behind the outfield wall.

There’s also new batting cages, the outfield grass has been resodded and the lights have been upgraded.

Inside, there’s a brand-new clubhouse for the Jays, while the visitors will arrive to a revamped clubhouse in the space that was the old home clubhouse.

The biggest change, of course, will be the fans in the stands this summer in Buffalo, which forced the Jays into the permanent changes to the stadium because they couldn’t use all of the concourse space like last year.

SP Anthony Kay, Triple-A: Recovering from a minor blister on his finger, the lefty was slated to pitch Sunday for the Bisons but that game was rained out. Buffalo begins a 12-game “homestand” in their temporary Trenton, N.J., home Tuesday.

SP Thomas Hatch, Triple-A: Hatch returned from an elbow injury May 20, but hasn’t pitched since thanks to rain messing with the Bisons’ schedule recently.

SP Nate Pearson, Triple-A: Majors and minors combined this year, Pearson has made four starts and the deepest he’s gone is 3.2 innings. He needs to find a rhythm at Triple-A and start pitching into the sixth inning on occasion before he’s an option again.

SP T.J. Zeuch, Triple-A: The 2016 first-round pick generated some buzz this spring with the front office and coaching staff talking him up, but the 6-foot-7 righty still isn’t missing enough bats and now he’s got a bit of a home run problem, having allowed nine across 31 innings early on this season.

SP Nick Allgeyer, Triple-A: The 25-year-old lefty is now on the 40-man roster, but did not make his MLB debut during his brief recall. His command has escaped him recently as he’s walked eight batters over his past two starts with Buffalo.

After missing eight days with some mild back soreness, Groshans returned to the Fisher Cats’ lineup last Thursday and smashed his first Double-A homer.

It’s hopefully a sign of things to come for the 2018 first-rounder who has started slow this season, slashing .240/.333/.340 across his first 57 plate appearances in the upper minors.

While the gaudy numbers haven’t been there yet for the 2018 first-round pick, Groshans does have hits in 10 of 13 starts despite the time missed.

Defensively, Groshans has made eight starts at shortstop and three at the hot corner.