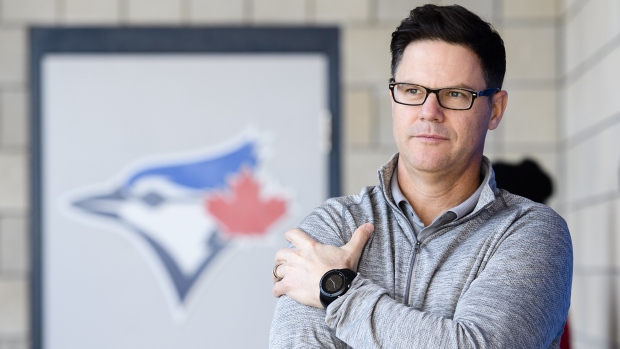 “The opportunity to add to our bullpen, to complement our bullpen, is what we’re focused on right now,” Atkins said matter-of-factly on Sunday.

If you’ve watched this team play over the past month, it’s very apparent that pitching is going to be needed in order to support one of the best offences in baseball and make a run in the American League East.

An already-elite lineup is about to get even better this week with the return of George Springer in Miami, but a bullpen that has pitched to a 5.68 ERA since May 20 — third-worst in all of baseball — and blown six saves has to be addressed.

Patience, however, may be needed just because of the timing of things.

While Atkins did say that there has been activity behind the scenes as some teams fall out of their respective division races, this time of year isn’t generally when teams like to sell off their top trade chips, especially when it comes to bullpen help.

There also may be relievers available in a month who aren’t on the market today.

“It’s not as simple as just hitting go,” Atkins said. “You want to make sure that you feel good about the alternatives, not only that you may have today, but that could present themselves in the future and understanding the market and the cost. That’s the only thing that ultimately would stop you [from making a move now].”

There are other priorities, too.

Even though the rotation seems to have some stability thanks to the southpaw trio of Hyun Jin Ryu, Robbie Ray and Steven Matz, who could return soon from a bout with COVID-19, and the recent contributions from Alek Manoah and Ross Stripling, adding a starter isn’t something Atkins is ready to rule out.

If you’re envisioning a postseason series, you can argue it should still maybe even be the priority.

“I think it’s definitely something that everyone is focused on right now because of the unknown coming off of a 60-game season,” Atkins said of rotation help. “Trying to think about workloads and how to best manage that, the best way to do it is with depth. We will absolutely be open to acquiring starters. We just have to think about what the opportunity cost is, how we’re using dollars and player capital, and what that could mean for the entire roster.”

“There’s not a ton of it on the market,” Atkins added.

A third baseman/versatile infielder — one who bats from the left side, preferably — is also on the shopping list, while the catching situation will be one to keep an eye on once Danny Jansen and Alejandro Kirk return from the injured list over the next couple of weeks.

“The bulk of that focus is on run prevention and how we can complement that pitching staff, thinking about defensive improvements as well, internally, potentially externally,” Atkins said. “We’re confident that this group is going to get turned around and playing much better and much more consistently, with wins on the way.”

After going 17-9 at “home” last summer, things haven’t gone as well so far in their second season away from Rogers Centre, with the Jays just 13-16 at TD Ballpark/Sahlen Field, compared to three games over .500 on the road. There’s a real chance the situation is finally getting to them a bit, especially with a good portion of their “home” crowds rooting against them this season … A lot of talk about where Springer will hit when he initially returns — he’ll be back in the leadoff spot eventually — but manager Charlie Montoyo was non-committal. The only reason it’s a conversation is because Marcus Semien has an .865 OPS and 16 homers leading off this season … Pushed back about a month this year, the Jays will draft 19th when the 2021 MLB Draft starts on July 11. It’s impossible to predict who will be left on the board by the time the Jays are on the clock, but here’s one name to keep an eye on: Ole Miss right-hander Gunnar Hoglund, who recently had Tommy John surgery and may fall farther than he should … No Canadian is projected to taken in the first round next month, but the top Canuck off the board could be Wright State second baseman Tyler Black, a Toronto native and son of our man Rod Black. The left-handed hitter ran up a 1.179 OPS with 13 bombs in 48 games for the Raiders in the Horizon League … Julian Merryweather (oblique) is tracking towards an early-July return, while lefty Ryan Borucki (elbow) could arrive in late June.

The Cavan Biggio at third base experiment hasn’t gone well over the first three months via the eye test, and the Statcast numbers back that up.

Through 30 starts at the hot corner, the 26-year-old has posted a minus-3 Outs Above Average mark, which places him 30th out of 35 qualified third basemen.

Biggio’s struggles have led to Santiago Espinal seeing a whole lot of third base time for Montoyo, especially late in games.

"We're having fun, we're working hard. That's what people need to know ... We're working hard, taking ground balls, trying to get better every day and people are in a good mood."

RHP Thomas Hatch, Triple-A: Now 10.1 innings into his rehab from an elbow injury, the righty threw a season-high 66 pitches in his most recent outing. He’s likely to end up in the big-league bullpen before long.

RHP Nate Pearson, Triple-A: The big right-hander has put together two straight strong outings as the Jays continue to prioritize developmental innings as a starter. Like Hatch, the Jays will be open to using him out of the ‘pen eventually, but not just yet.

SS Kevin Smith, Triple-A: The 2017 fourth-round pick looks like a new hitter this year with a revamped approach, but it’s his solid glove at multiple infield spots that’s going to keep him in the majors once he gets there.

RHP Hobie Harris, Triple-A: Not being on the 40-man is keeping him in the minors for now, but 23 strikeouts and a 1.76 ERA across 15.1 innings will get you noticed.

LHP Kirby Snead, Triple-A: In the same situation as Harris roster-wise, the southpaw has been dominant for the Bisons with 25 strikeouts and a 1.45 ERA across 18.2 innings.

With third base being one of the clear needs at the major-league level, it was obviously noteworthy to see the red-hot Moreno make his first pro start at the hot corner Sunday for the Fisher Cats.

Most impressively, he’s only struck out twice during that time, which is something the Jays have been focused on with the aggressive right-handed hitter.

A former amateur shortstop, I outlined in Moreno’s top 50 prospects blurb back in February that he was taking ground balls at different spots last summer and the Jays player development team decided to ramp up his pre-game infield work over the last month or so in order to get him ready for game action.

Interestingly enough, top third base prospect Jordan Groshans, who has made seven starts at the hot corner for the Fisher Cats, is also starting to heat up with a .343 average and a .939 OPS over his last 40 plate appearances, while 2020 fifth-overall pick Austin Martin enjoyed a five-hit game Saturday to push his season average to .286.

There’s a whole lotta talent in Double-A right now, but some of it may not be there long and it could start with a Moreno promotion, even if it’s just to Triple-A.​