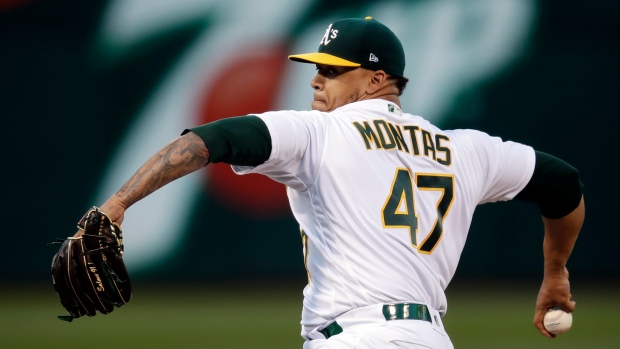 OAKLAND, Calif. — Frankie Montas spent too much time pitching from behind in his first start against Houston nearly two weeks ago. Given another chance, Oakland's rookie right-hander flipped the script and maintained the upper hand to end the longest winning streak in the majors this season.

A quirky home run by Matt Chapman helped, too.

Montas pitched into the seventh inning to stop Houston's 10-game winning streak, Chapman homered for the third time in six games and the Athletics beat the Astros 2-1 on Wednesday night.

"They've beaten us four times in a row and we have to have somebody go out there and put up some zeroes. That's exactly what he did," Oakland manager Bob Melvin said. "In a game like that you have to count on your starter to lead the way and he definitely did that."

Jurickson Profar added two hits including an RBI double to make up for his team-leading fifth error. Profar has driven in 10 runs over his last eight games after batting .106 with zero RBIs in the first 12.

It's the A's first win over the Astros in five games.

Montas' only loss this season came against Houston on April 5 when he allowed two runs in five innings. The quick-pitching right-hander was much better this time, allowing three hits and one run in 6 1/3 innings with six strikeouts and two walks.

Montas (3-1) didn't allow a hit until Yuli Gurriel's one-out single up the middle in the fifth. He also gave up an RBI single to Michael Brantley in the sixth and left after Josh Reddick's one-out single in the seventh.

"I was trying to attack early," Montas said. "They were swinging, too, so that helps me a lot. When I pitched there I was falling behind a lot. This one I just tried to get on top of the count."

Lou Trivinio struck out three of the five hitters he faced. Blake Treinen retired three batters for his sixth save.

Reddick said Montas was better at mixing his pitches than when Houston saw him previously.

"He didn't use his fastball as much as I thought he did the first time we faced him," Reddick said. "He kept us off balance and made his pitches. That kid is really good. If he stays healthy he's going to be even better in the years to come."

Chapman homered on a 1-1 pitch from Astros starter Wade Miley (1-2) leading off the sixth. Three of Chapman's four hits off left-handed pitching this season have been home runs.

"I definitely need to make a little bit of an adjustment on those lefties but it's nice that I've got to pop a few homers," Chapman said.

Miley gave up two runs in six innings and lost for the second time in seven starts against the A's.

"He threw one spinning cutter down to Chapman for the homer which was the difference," Astros manager AJ Hinch said.

Montas has not allowed a run in the first or second inning this season and is holding opponents to a .083 batting average in the first two frames. "It's starting to be dominant stuff at times," Melvin said.

Profar's throwing error in the first inning was his team-leading fifth in 20 games this season. Profar led the AL with 25 errors during his final season with Texas last year before signing with the A's in the off-season.

Athletics: Marco Estrada was placed on the 10-day injured list, one day after failing to make it past the fourth inning for a second consecutive start. RHP Chris Bassitt was recalled from Triple-A Las Vegas and is expected to take Estrada's spot in the rotation.

Astros: RHP Justin Verlander (2-0, 3.52 ERA) goes against the Rangers in Texas on Friday. Verlander has won each of his last two outings and had a season-high 11 strikeouts in his last start against Seattle.

Athletics: RHP Aaron Brooks (2-1, 4.24) faces Toronto for the third time in his career Friday in Oakland. Brooks is winless against the Blue Jays and last pitched against them in 2015.