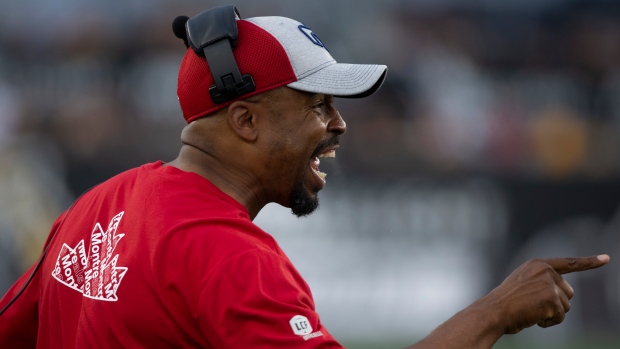 Khari Jones is optimistic that the 2020 CFL season can be salvaged in some form.

He doesn't even want to think about the alternative.

The Montreal Alouettes head coach spoke to reporters Friday via videoconference with the CFL season currently in limbo because of COVID-19. The global pandemic that has wreaked havoc on the sports world has already caused the league to postpone the start of the season to at least the beginning of July.

Pre-season play was originally scheduled to open May 24, with the regular season kicking off July 11.

Jones said the Alouettes will be prepared to play in whatever configuration the CFL comes back in, if it comes back at all. With cancellations of major events still happening at a brisk pace — this year's Calgary Stampede was scuttled on Thursday — there is a chance the Alouettes won't be able to build on their breakout 2019 campaign this year.

"I try not to think about it just because it would hurt," Jones said. "It would hurt a lot. To come off that season that we had and not be able to follow it up and see what kind of team we assembled, it would be tough."

The Alouettes were the surprise team of the 2019 CFL campaign, finishing 10-8 and advancing to the playoffs for the first time since 2014. The successful season came despite an inauspicious start that saw the 48-year-old Jones become Montreal's head coach less than week before the start of the 2019 campaign when Mike Sherman was fired. The team also spent the season being administered by the league after purchasing the club from American businessman Bob Wetenhall in mid-May.

Jones was given a three-year contract extension as a result, and the club found new ownership in businessmen Sid Spiegel and Gary Stern of Toronto-based Crawford Steel.

Understandably, Jones wants to get on the field and build on that momentum.

"I think there will be a season. I think we're doing everything necessary to make sure that that happens," he said. "There are a lot of factors that have to come into play before we can get to that point but I'm optimistic. I'm no doctor or anything like that but we see the curve getting flattened in a lot of places, so I'm just taking it day by day.

"As of right now we know we won't come back until after June and so my whole thing is getting ready for hopefully a start in July. We'll wait to hear from the CFL and hear what they say, but I am optimistic things will change and we'll have an opportunity to play."

Jones acknowledged there could be games lost or a compressed schedule, as he believes that the league is set on playing the Grey Cup on its scheduled date. The CFL championship game is set for Nov. 22 in Regina.

"I'd love to play the whole season out, but it seems we're pretty steadfast on the Grey Cup being on the date that it's scheduled," he said. "So I think what the plan is it that we'll work back from that, and however many games we play, we just get prepared to play those games.

"Starting in July, if that's the case, we can get most of the season in."

While Jones said he would like to play as many games as possible this season, he said the safety of players would need to be front of mind in any compressed season.

"You don't want to condense too many games in a short area, trying to get all the games in," he said.

Jones said the mood around the team is good, despite players and staff being isolated from each other to help fight the pandemic. He gave particular praise to quarterback Vernon Adams Jr., and linebacker Henoc Muamba in showing leadership by keeping in touch with their teammates.

"That's what you want. You want your guys on the team to step up and lead by example, and I know we're getting that from our guys," he said.

This report by The Canadian Press was first published April 24, 2020.