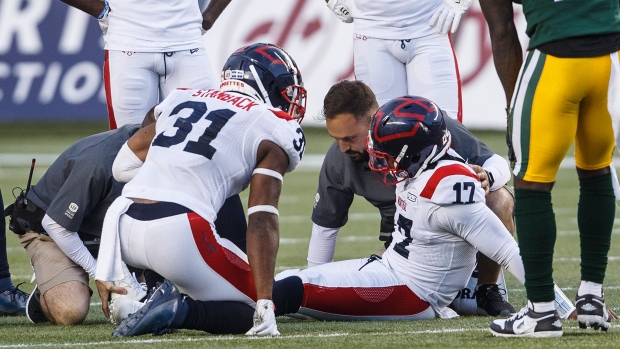 Hearing that @MTLAlouettes QB Antonio Pipkin will be out 4-6 weeks with a lower leg injury. Expected Vernon Adams will start coming out of the bye versus @Ticats. Brandon Bridge signed for depth this morning. #CFL #Als

Pipkin suffered the injury late in the third quarter of the Alouettes' Week 1 loss to the Edmonton Eskimos.

Vernon Adams, who replaced the injured Pipkin in Week 1, going 7-10 for 134 yards, one touchdown, and one interception, will start for the Alouettes when they return from their bye week and take on the Hamilton Tiger-Cats in Week 3.

Earlier in the day the Alouettes signed Canadian quarterback Brandon Bridge to a one-year deal, according to TSN's Farhan Lalji.

Brandon Bridge signs a 1-year deal with #Alouettes. Back to the team that drafted him in 2015. Glad to see @Air_Canada_7 get another opportunity. @CFLonTSN @TSN_Sports @SportsCentre @CFL pic.twitter.com/72fsBnb56r

Bridge returns to the team that drafted him in 2015.

The 27-year-old spent training camp with the Toronto Argonauts but was cut ahead of the season.

Bridge started his career with the Alouettes before moving to the Saskatchewan Roughriders. In parts of four seasons in the CFL, Bridge has thrown for 2,485 yards, 13 touchdowns, and eight interceptions. Bridge has added 321 yards and four touchdowns on the ground.