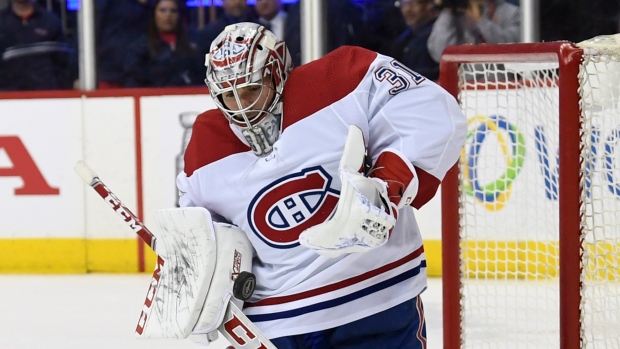 Claude Julien confirms that Carey Price did not play tonight as a precautionary measure. He has a light bruise on his trapper hand.

He's expected back on the ice before the end of the week.#GoHabsGo

Price is expected to be back on the ice before the end of next week.

When asked by reporters if Price sustained the bruise during their Monday morning skate, Julien had this to say:

"It doesn't matter when it happened, guys. All it is is a bruised hand and when he went to see the doctor the doctor said for precautionary reasons we're going to keep him out for a few days. So that's all it is. So we should see him back on the ice hopefully before the end of the week," the coach said via Stu Cowan of the Montreal Gazette.

Charlie Lindgren got the start in net Monday as the Habs fell 3-0 to the Toronto Maple Leafs in pre-season action. The 25-year-old Lindgren stopped 22 of 25 shots in the loss.

The Habs and Leafs will be back at it against one another on Wednesday.