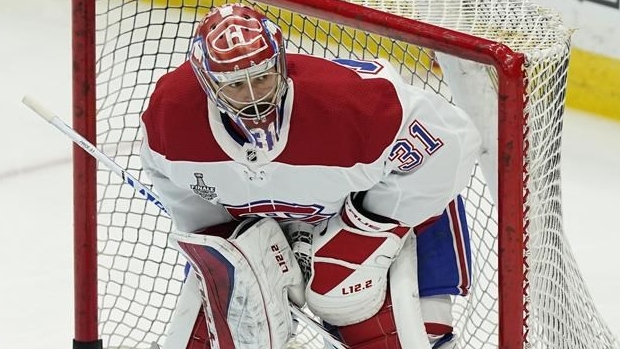 MONTREAL — Carey Price has broken his silence after voluntarily entering the NHL's player assistance program more than a month ago.

The superstar goaltender issued a statement through the Montreal Canadiens and also posted it to his Instagram account on Tuesday evening. Price said in the post that he entered a residential treatment facility for his substance use.

"Over the last few years I have let myself get to a very dark place and I didn't have the tools to cope with that struggle," said Price. "Things had reached a point that I realized I needed to prioritize my health for both myself and for my family.

"Asking for help when you need it is what we encourage our kids to do. And it was what I needed to do."

Price rejoined the Habs on Sunday but has not begun to practise. Instead, he has met with the team's athletic trainers to come up with a plan to get back into shape after having knee surgery on July 22 after leading Montreal to the Stanley Cup final.

He met with his teammates Tuesday for the first time since entering the program.

"It takes courage to face situations like that," head coach Dominique Ducharme said after Montreal's 3-2 overtime loss to the Los Angeles Kings. "That's the first thing, individually, is to get help and you need to have the courage to admit that you need it.

"He's got everyone's support. He spoke to the players this morning but we're a team and we'll continue to support him in this."

Price, a 34-year-old native of Anahim Lake, B.C., said in his statement that he has neglected his mental health for years and it will take some time to heal it.

"(A)ll I can do is take it day by day. With that comes some uncertainty with when I will return to play," he said.

"He's a leader on our team but to be honest, the hockey part you don't really even care about," said Canadiens defenceman Ben Chiarot. "You care about your friend and his family and the well-being of him and his family.

"For a man to come out and face his fears the way he did, that's not easy for guys to do and he did (it) head-on. So I'm proud to call him a friend."

Drafted fifth overall by Montreal in 2005, Price is the storied franchise's all-time wins leader. His 360 wins for the Canadiens tops Hall of Famers Jacques Plante (314), Patrick Roy (289), and Ken Dryden (258).

In 2015, he swept the NHL's key awards, winning the Ted Lindsay, Jennings, Vezina, and Hart trophies, becoming the first goaltender in league history to win all four individual awards in the same season.

Price has represented Canada internationally at all levels of play, most recently winning gold at the 2014 Sochi Olympics.

When the Canadiens announced on Oct. 7 that Price was voluntarily entering the assistance program jointly administered by the league and the players' union there was an outpouring of support from fans and NHLers alike.

"I appreciate all of the overwhelming support and well wishes," said Price. "I please ask that the media and our hockey community continue to respect our privacy at this time.

"Your support and respect of this so far has been a critical piece to my recovery."