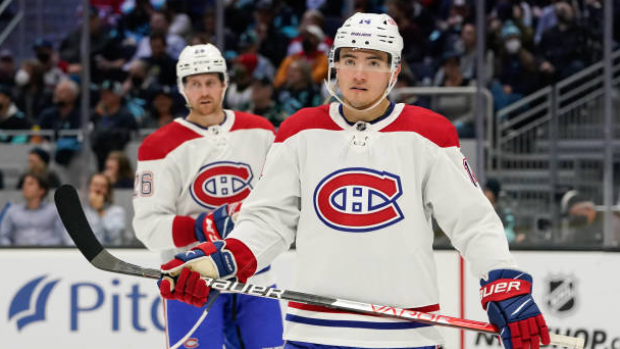 Montreal Canadiens defenceman Chris Wideman believes that Nick Suzuki has the attributes to be the team's next captain.

"There's nothing I've seen that doesn't say 'captain'", Wideman told the media after the team's morning skate ahead of Friday's regular season finale against the Florida Panthers.

#Habs Wideman on Suzuki and the season he’s had: “There’s nothing I’ve seen that doesn’t say ‘captain’”.

With captain Shea Weber on long-term injured reserve and very unlikely to resume his NHL career, general manager Kent Hughes confirmed that the team will have a new player wearing the 'C' going forward.

Suzuki was one of the players who wore an 'A' for the Habs this season alongside Brendan Gallagher, Paul Byron, Jeff Petry and the since-departed Ben Chiarot and Tyler Toffoli.

While the Canadiens will finish the 2021-22 campaign in last place, Suzuki had a career-best season with 21 goals, 39 assists and 60 points in 81 games this season, leading the team in scoring.

Drafted 13th overall by the Vegas Golden Knights at the 2017 NHL Draft, the London, Ont. product was acquired by the Habs on Sept. 10, 2018 in a deal that sent former Montreal captain Max Pacioretty to Vegas.

On Oct. 12, Suzuki signed an eight-year, $63 million contract to make him the team's highest paid forward starting next season. He also skated in his first NHL All-Star game this season as the Canadiens representative.