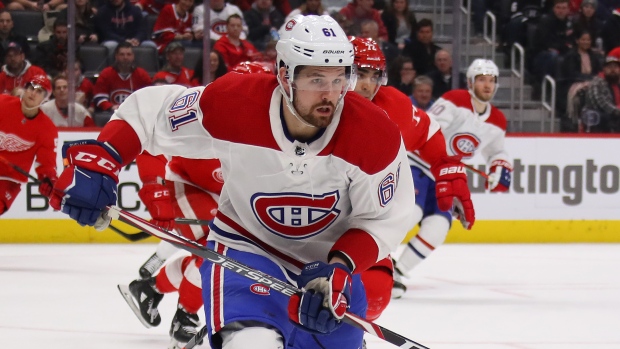 Speaking on a video conference Thursday, Ouellet said he had "zero symptoms" when he tested positive.

"I got into town and started getting tested for COVID and tested negative, and then all of a sudden got a positive test," said Ouellet, who returned to training Wednesday. "So from there the protocols were clear about removing players and making sure everyone stays safe.

"But right after that I kept testing negative. There's not one point where I felt sick or anything. I don't really know if I actually had it or not, but the protocols with the league and governments are pretty strict and they're there to keep it safe for everyone, so I had to isolate myself and wait a little bit before I could come back."

Ouellet had been in quarantine with his family at his Michigan home before returning to Montreal to resume training during Phase 2 of the NHL's return to play plan.

The Canadiens noted he was at the team's facilities on July 7, 8 and 9, but following that he had been listed as "unable to train" until Wednesday.

"It was kind of a confusing situation, a little bit frustrating, but on the other hand I felt healthy," he said. "I just had to go through the protocols that the league has put together to protect the players and I respect that and I think it's the best way to keep everyone safe."

The league said 30 players tested positive for COVID-19 in testing during Phase 2, with another 13 testing positive outside of the league's protocol.

The league reported Monday that two players tested positive during the first week of Phase 3, which started July 13 with the opening of training camps.

This report by The Canadian Press was first published July 23, 2020.