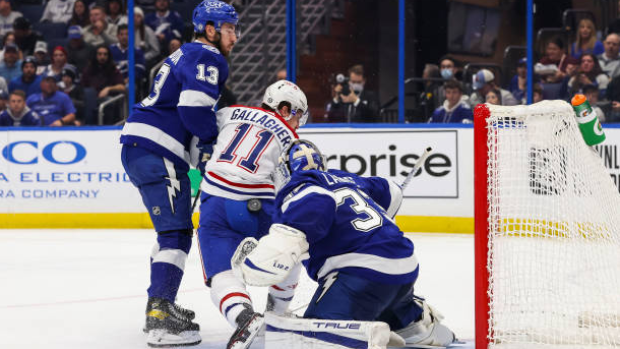 Challenging the goal, which would have put the Canadiens up 3-2 in the second period, proved costly as the Lightning scored on the ensuing power play and eventually picked up a 5-4 win in overtime.

“For sure it’s frustrating,” Ducharme said. “(Gallagher) makes a play, creates a turnover, gets a chance at the net, gets pushed from behind. I think the contact with the goalie, with his stick and his body, was because he was pushed from behind and if it’s not No. 11 on his back, it’s a goal.

“Obviously, he’s been in the league a long time and he’s going to the net every night and I think he has that reputation that he’s going to be taking an extra whack. I think he’s a fair player. We challenged it because from what I saw, and our video guys, we all agreed that it should have been a goal.”

Gallagher appeared to be going wide of Maxime Lagacé as he drove in from the goaltender's left but was moved toward the Lightning goaltender by contact from Boris Katchouk. Just as Gallagher made contact with Lagacé's upper body, the puck bounced off his leg and in.

The Canadiens rebounded from the 3-2 deficit with two third-period goals but were forced into overtime when former Hab Corey Perry scored with 20 seconds left. Ondrej Palat then provided the winner just 36 into the extra frame.

"For sure it's frustrating; on top of it, this is the second time they've done this to us, they did it to us at the Bell Centre last time," Canadiens goaltender Samuel Montembeault said. "But it's mostly frustrating because it's happened this year where we were down in the game by a little bit, and we came out for the third period with no energy.

"But this time we did the opposite; we played an excellent third period. That's why it hurts even more. We wanted to go get that win. But unfortunately, they tied it with 19 seconds left and it really hurt us."

The loss dropped the Canadiens, who were playing for the first time since Dec. 16, to 7-21-4 this season. Only the Arizona Coyotes have fewer points this season with 15 - three back of Montreal - with two less games played.