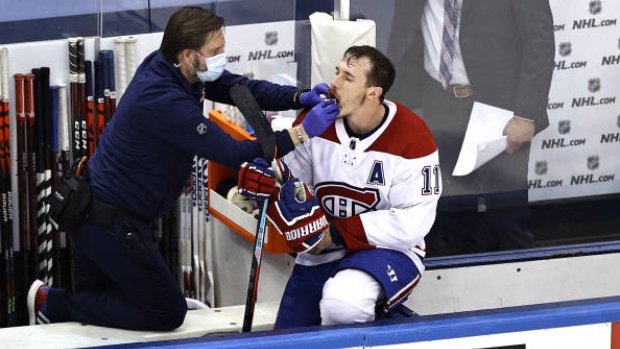 #Habs Bergevin said Gallagher had surgery performed on his jaw last night and will fly home to BC today. MB also confirmed Gallagher was playing through a “tear” in his hip which he suffered at the start of the Pittsburgh series.

Bergevin also said Gallagher was playing through a "tear" in his hip which he suffered at the start of the play-in series against the Pittsburgh Penguins.

The forward was forced out of Montreal's first-round series after he was cross-checked by Philadelphia Flyers defenceman Matt Niskanen in Game 5 Wednesday night. Niskanen was suspended one game by the NHL Department of Player Safety for the hit.

Gallagher scored his first goal of the playoffs earlier in Game 5 as the Habs went on to win 5-3. But it was the Flyers who got the last laugh, eliminating the Habs with a 3-2 victory in Game 6 Friday night.

In 59 games for Montreal during the regular season, Gallagher had 22 goals and 21 assists for a total of 43 points.