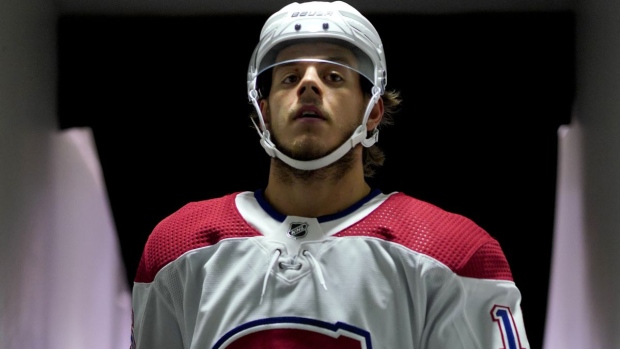 With their season on the line, the Montreal Canadiens will make Jesperi Kotkaniemi a healthy scratch and swap a defence pairing for Monday's Game 4 against the Tampa Bay Lightning.

Head coach Dominique Ducharme confirmed Jake Evans will draw in for Kotkaniemi, who was wearing grey at Monday's morning skate. Ducharme added that Alexander Romanov and Brett Kulak will draw in as the third pairing of defence in place of Erik Gustafsson and Jon Merrill.

Dominique Ducharme confirms that Jake Evans, Alexander Romanov and Brett Kulak will be in the lineup tonight.#GoHabsGo

During the team's morning skate, Evans centred a line with Paul Byron and Artturi Lehkonen in line rushes, while Kotkaniemi skated as an extra.

“It’s nothing against (Kotkaniemi) or anything else but we have depth and we have options,” said Ducharme, who added he spoke to the centre to explain the decision. “Again, it’s not punishment… sometimes as a hockey player you face these moments.

"He’s a good team guy and understands the situation even though nobody wants to sit.”

Kotkaniemi, 20, has five goals and eight points in 19 games this postseason. He has one assist in three games against the Lightning and was a minus-2 in Friday's 6-3 loss in Game 3.

The No. 3 overall pick in the 2018 NHL Draft, Kotkaniemi had five goals and 20 points in 56 games during the regular season.

Evans dressed in Game 2 last week against the Lightning for the first time since suffering a concussion in Game 1 of the team's second-round series against the Winnipeg Jets on June 2. He has one goal in five games this postseason.

Romanov, who played 54 games as a rookie during the regular season, will play just his second game of the postseason on Monday. Kulak has dressed in 11 games this postseason, though he's played just one since the third round began.