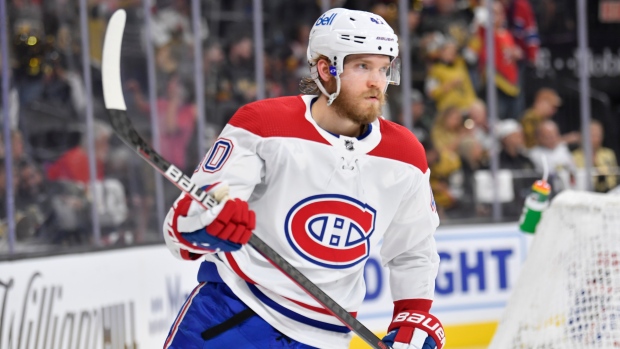 TAMPA, Fla. — Montreal Canadiens forward Joel Armia is winging his way to Florida to await a game-time decision on whether he'll take part in Game 1 of the Stanley Cup final.

Assistant coach Luke Richardson says Armia, bumped from the lineup over the weekend due to COVID-19 protocols, is flying to Tampa via private jet.

If he doesn't play, Jake Evans — levelled by Mark Scheifele in Game 1 of Montreal's second-round series with the Winnipeg Jets — is expected back in the lineup.

Montreal came from 3-1 down in their opening-round series to stun the Toronto Maple Leafs in seven games, then swept the Jets and downed the favoured Vegas Golden Knights in six games.

The Lightning will represent the Canadiens' toughest test in their quest for their 25th Stanley Cup — which would be the first for any Canadian team since Montreal won in 1993.

"Joel is on his way down here right now on a private jet," Richardson said today following the team's pre-game skate.

"We're excited to have him join us."

The Lightning are the defending Cup champions with a deep team and an elite goaltender in Andrei Vasilevskiy to match up against Montreal superstar Carey Price.

The first two games are in Tampa before switching to Montreal for Game 3 on Friday, but Richardson is confident that a stellar road record in the playoffs for the Habs will hold them in good stead.

"I think it's the way that we forecheck and backcheck," he said when asked about the team's 7-2 road record so far in the post-season.

"We really clog up the middle of the ice, and do a good job of it consistently, so that's frustrating for home teams."

That frustration, he added, "works right into our game plan."

Montreal head coach Dominique Ducharme, who has been isolating since Game 2 of the semifinals due to a positive COVID-19 test, is scheduled to return to the Habs bench for Game 3.

Richardson wouldn't elaborate on why Armia could be back in the lineup so quickly, although the rapid timelines would suggest a false positive COVID-19 test result.

The timing couldn't be better: Armia is a central component of Montreal's penalty-kill unit, which hasn't allowed a goal in 13 playoff games.

Tampa's power play, meanwhile, is one of the best in the business, scoring on 45.5 per cent of its chances at home and 37.7 per cent overall so far in the post-season.

"He's been a big piece of our team and in these playoffs, especially on our penalty kill," said Habs winger Josh Anderson.

"We know how lethal their power play is — it's pretty dangerous and it can cost you games."

This report by The Canadian Press was first published June 28, 2021.