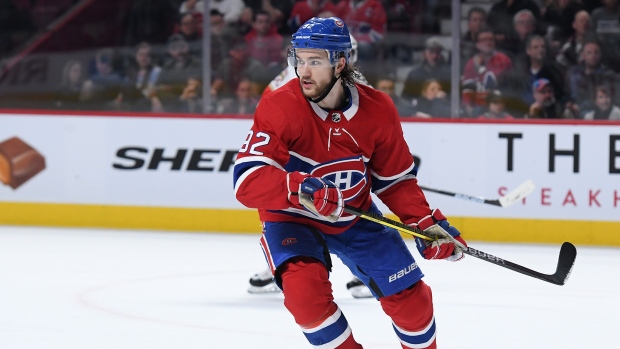 Montreal Canadiens head coach Dominique Ducharme says that Jonathan Drouin is day-to-day after taking a puck to the head and will be re-evaluated on Thursday.

Per TSN's John Lu, Ducharme added that if Drouin is ready to play on Thursday against the New York Islanders, he'll line up at centre between Mike Hoffman and Josh Anderson like he did prior to Tuesday's injury.

Drouin was struck by a shot from teammate Brett Kulak in the first period of Tuesday's 3-0 victory over the Detroit Red Wings. He immediately left the ice and went to the dressing room before being sent to the hospital for further evaluation. He returned to the arena later that night.

"I went to go check on him in the first period, but he was off to the hospital getting checked on and then I saw him after the game, everything was going well," Anderson said. "Obviously he's going to get looked at tomorrow. He just went there for cautionary reasons, but it looks like he's OK. Any time you see that is very scary.”

Drouin has two goals and seven points in 11 games this season.