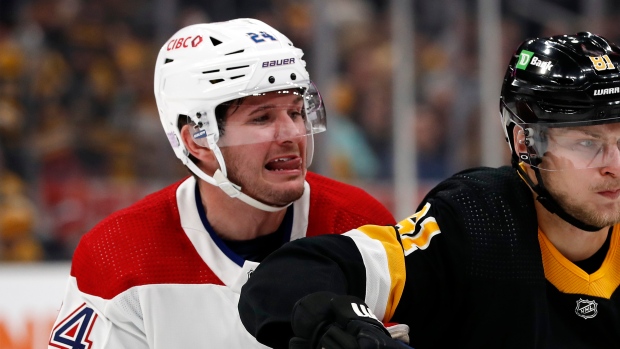 The Montreal Canadiens placed forward Adam Brooks on waivers Tuesday, just over a month after claiming him off waivers from the Toronto Maple Leafs.

The 25-year-old has one assist in four games with the Canadiens this season. Brooks was joined on waivers by Vancouver Canucks defenceman Guillaume Brisebois, while St. Louis Blues winger Kyle Clifford cleared waivers Tuesday.

Forward Adam Brooks has also been placed on waivers (non-roster).

Head coach Dominique Ducharme announced earlier on Tuesday that forward Mike Hoffman will be out at least one week with a back injury, while goaltender Jake Allen is day-to-day with a concussion.

The news comes Jonathan Drouin returns to the lineup against the New York Rangers for the first time since suffering a head injury on Nov. 2.

Ducharme added that Hoffman, who did not play in Sunday's loss to the Boston Bruins, will miss at least one week with the injury.

The 31-year-old has four goals and seven points in 13 games this season, the first of a three-year, $13.5 million signed in the off-season.

Ducharme confirms that Mike Hoffman will be placed on injured reserve. He's out at least one week.

For his part, Jake Allen suffered a concussion. He's day-to-day.

Allen was injured in Saturday's overtime loss to the Detroit Red Wings, exiting after making eight saves to start the game.