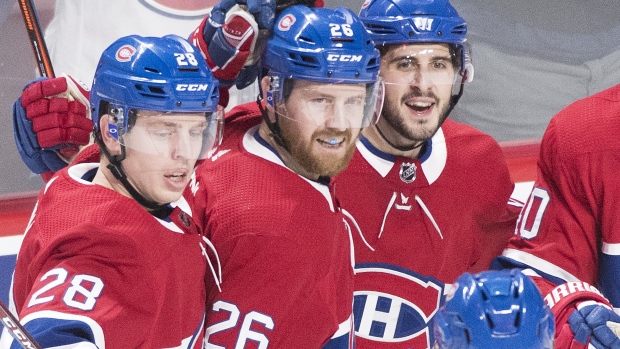 MONTREAL — Jeff Petry was impressed by his young teammates during the Montreal Canadiens' improbable run in the 2020 playoffs.

The veteran defenceman hopes by sticking around he'll get to see them suit up in the post-season again, and this time in from a full-throated Bell Centre crowd.

The Canadiens announced Friday that they signed Petry to a four-year contract extension with an average annual value of US$6.25 million. Petry was eligible to become an unrestricted free agent after the 2020-21 season.

The 32-year-old Petry registered 40 points (11 goals, 29 assists) in 71 games with the Canadiens last season. It was his third straight season hitting the 40-point mark.

The Canadiens are coming off a mercurial season which saw the club post two eight-game losing streaks and plummet out of the playoff picture, only to be given a lifeline by being included in the NHL's 24-team return to play format following a months-long layoff due to the COVID-19 pandemic.

The Habs defied expectations by dispatching the heavily favoured Pittsburgh Penguins in a best-of-five playoff qualification series, then took the top-seeded Philadelphia Flyers to six games in their first-round playoff meeting.

While Petry — who had two game-winning goals in the league's restart — and well as defenceman Shea Weber and star goaltender Carey Price brought a veteran presence to the Canadiens in the post-season, young forwards such as Jesperi Kotkaniemi and Nick Suzuki showed a promising future for the storied franchise.

"The last little return to play, it showed just what we have coming up. We have a lot of good young players and guys like KK (Kotkaniemi) and Suzuki showed that in the playoffs, which is huge," Petry said. "With those guys coming up, it shows that the future is bright here, and that was ultimately one of the deciding factors in signing this extension."

As exciting as Petry said these playoffs were, he added the young Habs won't have truly experienced representing Montreal in the playoffs until they play a post-season game at Bell Centre. Because of the pandemic, Eastern Conference teams all played at Toronto's Scotiabank Arena, with no fans in attendance.

"Obviously this year was a very unique situation, and guys that were playing in the playoffs for the first time in their career, or with this team, didn't get to experience what Montreal is truly like in the playoffs," Petry said.

Petry said there was more to consider as a potential free agent this time around than when he signed with Montreal after being acquired from Edmonton at the 2015 trade deadline. He and his wife have three children, with the oldest now starting school.

But he said his family is comfortable in Montreal, and uncertainty around what the league might look like going forward also influenced his decision.

"Nobody knows what this upcoming season is going to bring, and that all has effects on decisions in guys' careers moving forward," Petry said. "So I would definitely say that had some impact on the decision. But I knew that (GM Marc Bergevin) wanted to work on an extension. If it made sense for me the there was a very strong chance that I was going to be coming back."

Always an offensive threat from the blue line, Petry can also provide plenty of defence. He was Montreal's hits leader with 177 this season, and he also led all Canadiens defencemen with 30 takeaways.

Petry has appeared in 680 regular-season games over 11 seasons with the Canadiens and the Edmonton Oilers, recording 253 points (69 goals and 184 assists). He also added seven points (five goals, two assists) in 25 post-season contests.

He has scored 52 times since joining the Canadiens, which puts him in a tie with Shea Weber for 16th among defencemen in franchise history.

The six-foot-three, 201-pound right-handed rearguard played with the Michigan State University program for three seasons (2007-08 through 2009-10). He concluded his collegiate stint with nine goals and 67 points in 118 games.

Petry also played two seasons in the USHL with the Des Moines Buccaneers (2005-06 and 2006-07). In the junior ranks, he recorded 19 goals and 41 assists in 103 regular season games. He added two goals and 13 points in 19 post-season appearances with Des Moines.

A native of Ann Arbor, Michigan, Petry was selected in the second round, 45th overall, by the Oilers in the 2006 NHL draft. The Canadiens acquired Petry from the Oilers at the 2015 trade-deadline in return for a second round and a conditional fifth round pick.