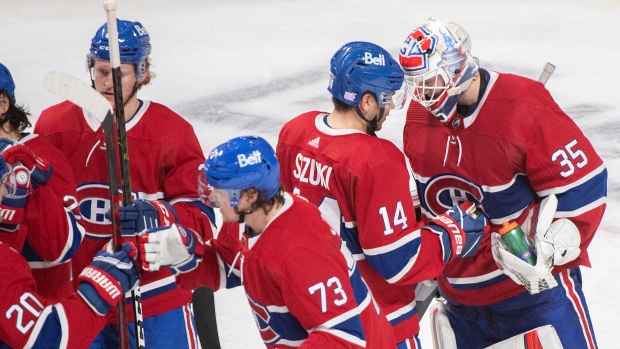 MONTREAL — The Montreal Canadiens embark on a three-game road trip with a much-needed boost of confidence.

Montreal exploded for four goals in the second period and held on to win 6-3 against the Nashville Predators Saturday to snap their four-game losing skid, despite giving up a third-period hat trick to Matt Duchene.

Head coach Dominique Ducharme thought his team returned to their roots of playing a solid game without being too flashy.

“We were engaged in what we wanted to do, we were a lot sharper mentally and it showed in the way we executed,” Ducharme said. “Sometimes execution is not complicated, it’s not about making highlight-reel passes and plays.

“It’s just about being strong enough mentally to make good decisions, stick with the plan and to be confident that in the long run it’s going to pay off.”

The Canadiens, which play at Washington, Buffalo and Pittsburgh on the upcoming road trip, remain among the bottom feeders in the NHL. But Ducharme hopes the win triggers a consistent string of successes.

“I didn’t get to play a lot since the beginning of the year so this was my opportunity to really show what I have,” Montembeault said. “I really wanted to make a big save from the start and give the team a chance.

“Obviously for the guys on the bench, that helps their confidence and I think their execution was much better so as the game was going we were better and better.”

Duchene scored his third-period hat trick in less than 10 minutes for the losing Predators (9-7-1).

Juuse Saros allowed five goals on 19 shots and was pulled in the second period. David Rittich blocked all nine shots in relief.

“In the third period, we wound up scoring on the power play and it gave us a chance to get in, but we gotta be better and more consistent,” said Nashville head coach John Hynes. “We didn’t get rewarded for what we probably deserved in the first and then made some ill-advised plays in the second and we paid for it.”

The Preds lost their last two road games against the Canadiens and the Toronto Maple Leafs. Nashville had an extended, three-day break due the postponement of their matchup with the Ottawa Senators who were hit with a COVID-19 outbreak.

“We should’ve come out and have a lot of energy,” said Roman Josi, who had an assist. “Montreal played Thursday so that’s definitely not an excuse. If anything, it should have helped us tonight.”

Lehkonen broke the ice 2:41 into the game. The Finn recovered the puck in Saros’ crease and tapped in his first goal of the season.

The Predators thought they had levelled the score in the first period but referee Corey Syvret waved the goal off, judging that Luke Kunin directed the puck into the net with his arm.

Montreal doubled its lead at the start of the second period when Josh Anderson made a no-look, backhand pass for Dvorak who bagged his third of the campaign.

Gallagher made it 3-0 for the Habs on the power play at 3:32. The veteran received a pass from Drouin and tapped the puck in.

Poehling notched two consecutive goals in the span of 37 seconds for Montreal’s fourth and fifth unanswered goals of the night at 9:31 and 10:08 to complete the four-goal second period.

Duchene scored power-play goals at 6:36 and 12:53 of the third period before completing his hat trick at even strength at 16:27 to bring the Predators within two.

The Preds pulled their goalie in an attempt to complete the comeback but Toffoli sealed the 6-3 win with an empty-netter.