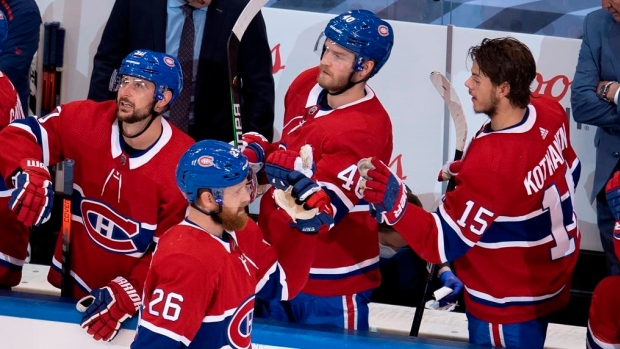 Can a team strength also be a team weakness?

Last Thursday we did a micro-data postmortem on the Vancouver Canucks – an intriguing team flush with young talent, but one that was frequently vulnerable to opponent counterattacking opportunities. More than anything, a review of those counterattacking goals conceded is an opportunity to trim down the goals-against ledger, where Vancouver struggled at times last year.

Let’s take a look at another Canadian team – and perhaps soon-to-be division rival – in the Montreal Canadiens.

Montreal’s aggressive spending will be subject to debate, but this was a team that finished 12th in 5-on-5 goal differential (+5) last season with a series upset over the Pittsburgh Penguins in the qualifying round. In short, this is a competitive team.

One of the most intriguing parts of Montreal’s even-strength success – aside from the fact that it never looked anything like their special teams play, which was terrible all year long – was the similarity between the way they scored goals and conceded goals.

Montreal’s scoring came by committee last season, largely driven by tenacity in the offensive zone. They used their speed to force structural breakdowns and turnovers, and were fantastic at retrieving loose pucks, especially off rebounds. The aforementioned Gallagher has made quite a name for himself scoring on rebounds right in front of the net, and it’s carried over stylistically with the rest of the top six. They will put pucks on net, crash the crease and recover loose pucks. Sometimes those loose pucks find the back of the net.

Strangely, Montreal exhibited quite a bit of difficulty at preventing rebound opportunities in the defensive zone. You might attribute this to the smaller size of the Canadiens lineup last year, or the fact that only one of the three Canadiens defensive pairings featured Shea Weber. It was a worrisome trend, especially for a team that conceded fewer shots than 23 other clubs. Limiting shots is great, but marginally less so if the shots you are giving up are coming from the most dangerous scoring areas of the ice. 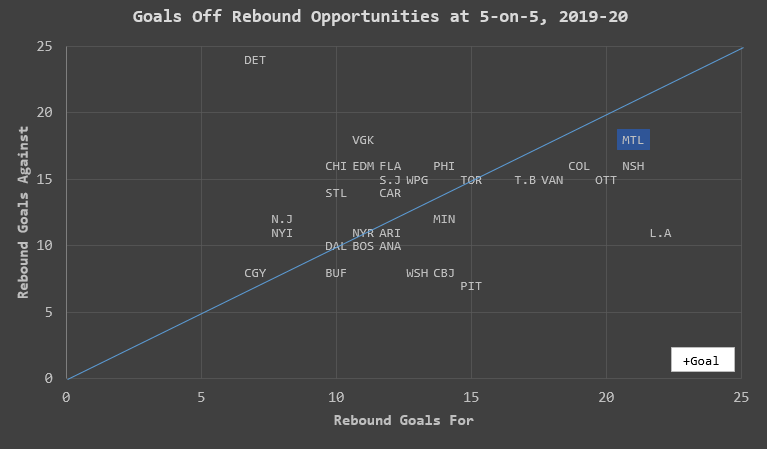 Three Montreal forwards – Gallagher, Max Domi and Phillip Danault – accounted for more than half of the Canadiens’ rebound goals last season, a strong indication that Montreal’s top six is not only generating flurries of rebound opportunities, but scoring on them in the process.

But Montreal’s impressive ability at recovering these loose pucks and translating them into goals was sharply mitigated last season because they were similarly ineffective at protecting the front of the net and cleaning up loose pucks in front of goaltender Carey Price.

Like the Vancouver example, how you turn this data into actionable improvement is through video review. Whether it is structural breakdowns, poor rebound control from the Montreal goaltenders, or the wrong personnel on the ice in difficult matchups, there was a diagnosable problem in the Montreal defensive zone.

Clean it up, and Montreal’s remarkable ability to generate multi-shot shifts and high-danger chances off of rebounds instantly becomes more valuable.