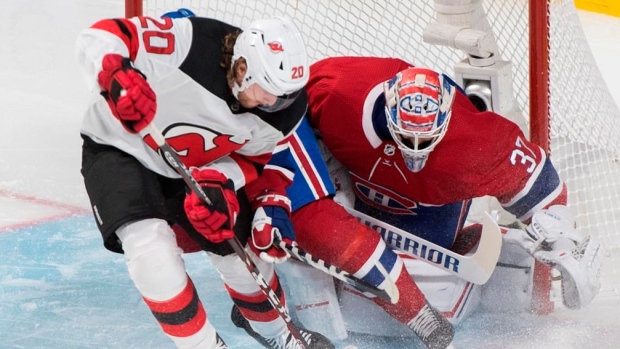 The Montreal Canadiens placed goaltender Keith Kinkaid on waivers Monday after a 1-1-3 start to the season.

The 30-year-old, who was not at practice on Monday, has a 4.24 goals-against average and a .875 save percentage in six games this season.

In a corresponding move, Montreal has called up Cayden Primeau and Matthew Peca from the AHL’s Laval Rocket.

Last season, the 199th pick in the 2017 NHL Draft was presented with the 2019 Mike Richter Award, which is given to the NCAA’s most outstanding goaltender.

Peca, 26, has recorded four goals and eight assists in 18 games with the Rocket. The former seventh-round pick spent 39 games with the Canadiens last season, recording three goals and seven assists.

The team announced earlier on Monday that defenceman Victor Mete will miss at least two weeks with an ankle injury.

Mete exited Saturday's overtime loss to the Philadelphia Flyers with the injury and did not play Sunday against the Boston Bruins.

The 21-year-old has three goals and eight points in 26 games this season and ranks fifth on the team in ice time with an average of 17:28 per game.