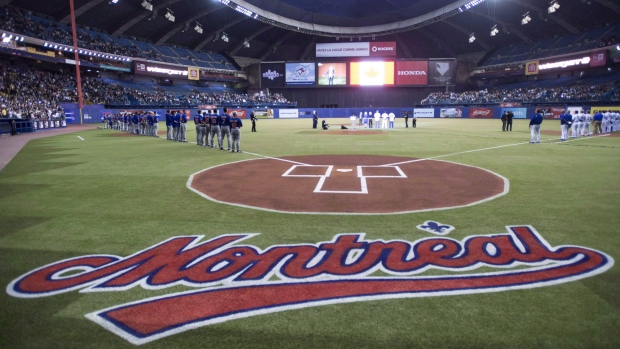 The Montreal Baseball Group said in a news release Friday that it does not expect an announcement concerning a potential pairing with the Tampa Bay Rays organization that would see baseball return to Montreal to come on Nov. 7, nor in the following day or weeks.

Last weekend, Le Journal de Montreal reported that an announcement on a potential Tampa-Montreal partnership could follow a municipal election on Nov. 7.

“Given the important work that remains to be done, Stephen Bronfman would like to clarify that no announcement concerning the project is scheduled for November 7, nor in the following days or weeks. ‘We must continue our rigorous work until we can share a comprehensive and inclusive vision that we believe will garner community support,’” read a statement released Friday.

While no formal announcement appears imminent, Rays president Matt Silverman said last weekend during an appearance on This Week in Rays Baseball that the team planned to unveil a sign on the back wall of Tropicana Field showcasing the plan to split games between the Tampa-St. Petersburg area and Montreal.

But after public outcry, the Rays announced earlier this week that would not happen. Owner Stuart Sternberg went on radio and apologized to the Tampa fanbase for what he called an error in judgement.

“I made a big mistake, a real mistake, in trying to promote our sister-city plan with a sign right now in our home ballpark. I absolutely should have known better. And really, I’m sorry for that,” he said.

“We’re going to add a sign in the right field foul territory with a very simple Tampa Bay-Montreal graphic,” Silverman said last weekend of the original plan. “Especially with the eyes of baseball on us this October, we want that visible symbol of our plan and our excitement for it.”

In June of 2019, MLB gave the Rays permission to explore playing some of their season in Montreal, a city that has been without a team since the departure of the Expos to Washington D.C. following the 2004 season.

The plan involves the Rays holding spring training and the early part of the season in Tampa and the rest in Montreal, with postseason play likely alternating between markets each year.

Silverman said Saturday he was "optimistic" about the plan as talks have progressed away from the public eye and added it is the only viable way to keep baseball in the Tampa-St. Petersburg area long term.

“It’s the best and possibly only chance for baseball to be here for generations. That’s been our sole focus. It’s never been about other markets and relocation overtures. It’s always been about how we can make it work here," Silverman said.

The plan involves new stadiums being built in each market, neither of which have been approved by either city. Any potential move or stadium change would take effect no earlier than 2028 as the Rays' lease at Tropicana Field does not expire until the end of the 2027 season.

The Montreal Baseball Group’s statement from Friday references a potential stadium location in the Wellington Basin area of the city.

“The design and development of the Wellington Basin site and adjacent spaces will propose a conscientious, responsible and innovative project in order to integrate a new sports and community complex that will transform a strategic area of Montreal into an attractive living environment,” the statement read.

“There’s been an encouraging shift among our fans and community and a real openness about the plan,” Silverman said last weekend. “[Tampa Mayor Jane Castor] was the first official who spoke up and expressed openness, and more voices are joining that chorus.”

The Rays currently rank 27th in MLB in average attendance per game at 9,513. Tropicana Field has been the home of the franchise since its inception in 1998.