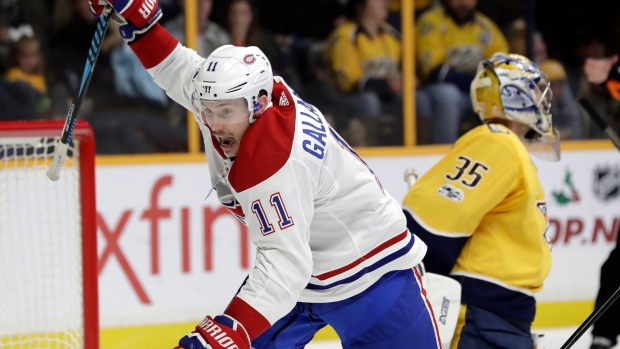 If you asked for my short list of the players I’m most excited to watch heading into the 2019-20 season, Montreal Canadiens winger Brendan Gallagher would certainly be on it.

It wasn’t long ago that there were concerns around the league about Gallagher’s diminutive frame limiting his offensive productivity. Listed at 5-foot-9 and 180-pounds, the fear was that Gallagher would be easily pushed out of premier scoring areas by bigger defenders, and that his ceiling would be that of a specialist somewhere in the bottom six of most forward groups.

Those concerns never materialized, mostly to the credit of Gallagher himself. He has tuned his hockey abilities to complement an offensive zone work ethic that is second to none in the NHL. I frequently refer to him as a pit bull on skates, because it seems the only time his motor kicks off is between shifts. He’s also a much stronger player than his size would indicate – bluelines around the league have tremendous difficulty keeping him out of the slot, which is one of the big reasons why he’s surpassed the 30-goal mark in consecutive seasons.

Montreal surprised the league last season with how scrappy and relentless they were at 5-on-5. Their return to a speed-based game with an unrelenting forecheck made them an uncomfortable opponent for most teams in the league, and it’s why they surprisingly finished just two points back of the final wild-card spot in what was originally considered a transition year.

The Canadiens’ top line, keyed by Gallagher, was a major weapon for the team. Playing predominantly with Phillip Danault and Tomas Tatar, Montreal found an elite top unit seemingly out of thin air. Their underlying numbers as a trio – they played nearly 700 minutes together – were otherworldly: 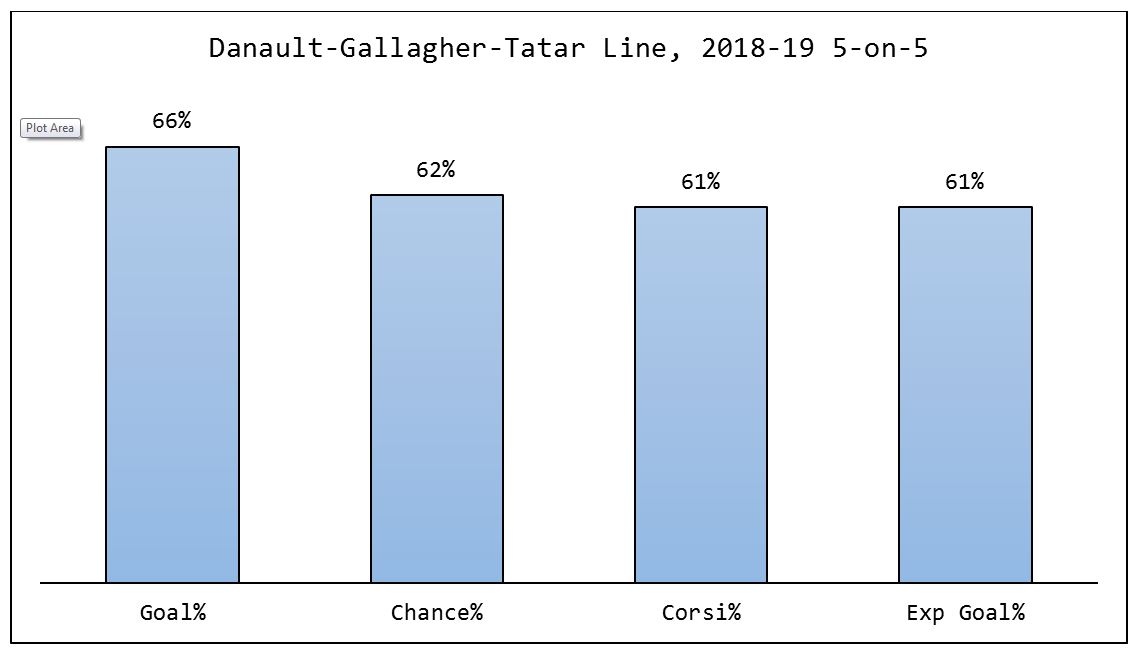 When we talk about Stanley Cup contenders, we’re talking about teams that are generally getting at least 52 per cent of the shots or scoring chances when they are on the ice. That advantage, although seemingly small, adds up considerably over time. Ultimately it ends up driving favourable goal differentials, which leads to points in the standings. Any time you have a line outchancing, outshooting and outscoring their opponents at a nearly 2 to 1 ratio, you know something is working.

Some of the success certainly has to do with chemistry. To my eye, the skill sets of Tatar and Gallagher (as one example) seemed incredibly complementary, and in both cases we saw substantial spikes in performance. But Gallagher’s play was the most noteworthy to me, if only because what he did last season – and what he may be able to repeat last season – is almost impossible to articulate.

In the modern era (2007-19), we have seen a handful of volume shooters come through the league. At the top of the list is – who else? – Alexander Ovechkin, who leads the league in shot volume on a rate basis year after year. In fact, Ovechkin owns seven of the eight highest shot volume seasons over this span. Before the 2018-19 season, only Ovechkin’s teammate Alexander Semin (2009-10) and Phil Kessel (2009-10) had managed anything remotely similar. 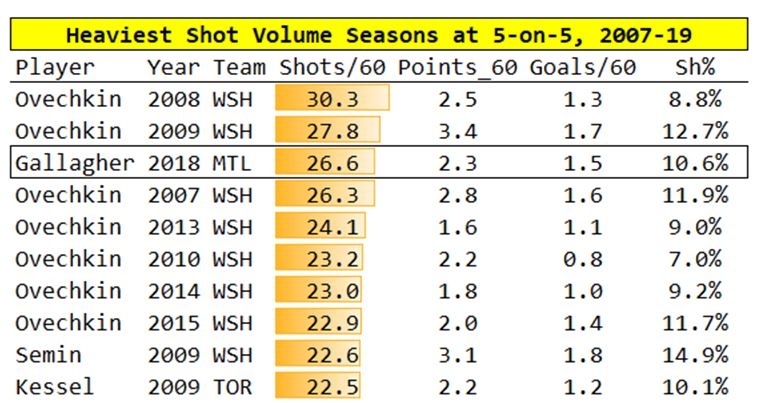 Absent Ovechkin (who will retire as one of the two or three best scorers ever), Gallagher’s 2018-19 season has no recent comparable. His incredible shot volume wasn’t the result of perimeter shots that look great on paper but statistically have a very low percentage of finding the back of the net. Even with some of the heaviest shot volume we have seen in the past decade-plus, Gallagher still shot 10.6 per cent at 5-on-5 and 10.9 per cent across all situations, and on an average shot distance of just 28 feet.

The average NHL forward attempted 13.2 shots per 60 minutes in 2018-19, with an average shooting percentage around 11 per cent. With Gallagher, you carried close to the league average conversion rate on more than double the attempts. An incredible feat!

If Gallagher and Montreal’s top line are able to recreate the magic from last year, the Canadiens may very well be able to top last year’s performance in the standings. If that’s the case, it’s likely they’ll steal a playoff berth from an unsuspecting Eastern Conference club.