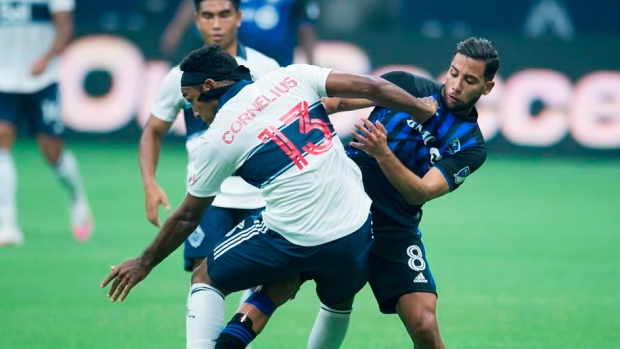 VANCOUVER — Samuel Piette says his Montreal Impact teammates showed "a lot of character" in a feisty battle against the Vancouver Whitecaps on Sunday.

In a match that had a little bit of everything — including a penalty kick, a pair of red cards and a near brawl — the visiting Impact persevered for the 4-2 victory.

The win keeps Montreal's hope of winning the round-robin portion of the Canadian Championship alive.

"I'm really proud of the boys tonight," said Piette, who scored his first-ever Major League Soccer goal in the outing. "It just shows that we're not done yet. We want to go all the way."

Saphir Taider had a goal and two assists for the Impact (5-4-1), while Orji Okwonkwo and Piette each added a goal and a helper. Romell Quioto rounded out the scoring for Montreal.

The Impact have been playing well offensively this season, Piette said, getting in behind their opponents' back line, but the squad hasn't always been able to finish.

"Sometimes it's just a matter of it being a bad day and not having the final touch to put the ball in the back of the net. And I think we had that tonight," he said.

"If we keep creating chances, we'll obviously pose problems for other teams and score more goals."

Theo Bair scored for the Whitecaps (3-7-0), who also got an own goal from Montreal's Rudy Camacho.

The young Vancouver forward struck in the eighth minute, collecting a nice ball from David Milinkovic and going for a run down the sideline, beating Camacho and Luis Binks on the way. Bair bested Montreal 'keeper Clement Diop with a long shot from outside the box that found the bottom left corner of the net.

Diop was noticeably frustrated by the goal, booting the ball over the ad boards.

Despite a tough start, the Impact were able to turn the game around, said coach Thierry Henry.

"We started to play. We started to trust the shape, our structure. And then we scored goals. It changes the game when you put the ball in the back of the net, more often than not," he said.

The Whitecaps started out strong but struggled after Okwonkwo tied the game in the 15th minute, said Vancouver coach Marc Dos Santos.

"We became unstable, we struggled and then that penalty shot that just before the half, it hurt the team. It was tough for us to come back unfortunately," he said.

The game's tense atmosphere erupted in the 57th minute after Vancouver's Lucas Cavallini drove hard toward the Montreal net, appearing to kick Diop in the head en route. He received a yellow card for the play, his second of the game.

A scrum quickly broke out near the Impact net, with several players pushing and shoving. Cavallini and Diop seemed close to trading blows before they were separated by teammates.

Cavallini headed to the locker room.

Montreal lost its man advantage in the 70th minute when midfielder Emmanuel Maciel took out Vancouver's Cristian Dajome with a nasty tackle mid-field. He was shown the yellow card, but after video review, he was given a red and tossed from the game.

Henry said he'll speak with his group about the "weird" final 20 minutes or so, but didn't want to dwell after a hard-fought victory.

"We won a game 4-2 away from home. We like to think that’s a good win," he said. "Was the game perfect? The game is never perfect. But we're happy with the win."

Not only does the win give Montreal three crucial points in the MLS standings, it also counts toward the Canadian Championship where the Impact are looking to bump Toronto FC from first place and secure a spot in the final.

The final game of the tournament's round-robin portion will come Wednesday when the 'Caps and Impact face off once again in Vancouver. Montreal needs a win to seal first place.

The winner of the round robin will face the victor of the Canadian Premier League's Island Games.

NOTES: The air in the stadium was hazy with smoke from wildfires burning south of the border. Referee Pierre-Luc Lauziere called for a hydration breaks in the game's 30th and 76th minutes Sunday due to the poor air quality. ... David Milinkovic and Michael Baldisimo had assists for Vancouver ... Zachary Brault-Guillard had an assist for Montreal.

Note to readers: This is a corrected story. A previous version had incorrect information about the Montreal Impact's position in the Canadian Championship.