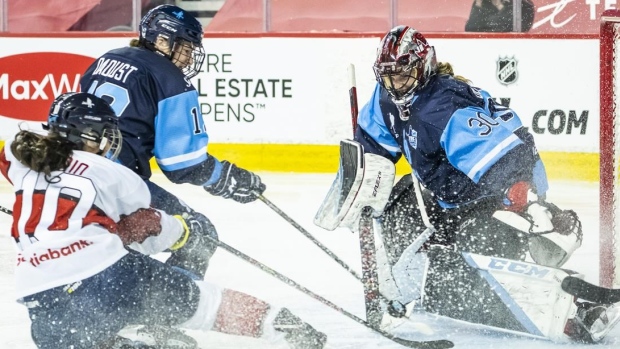 Poulin is the tournament scoring leader with four goals and four assists.

Ann-Renee Desbiens made 23 saves for Montreal, while Kristen Campbell blocked 31 shots for Calgary.

The Montreal squad bounced from a 4-3 loss against Toronto's Team Sonnet on Thursday.

Toronto (2-1-0) faces Calgary to wrap up the preliminary round on Saturday with the championship game to follow on Sunday at Scotiabank Saddledome.

Their goal is a sustainable league with a living wage and the competitive supports the men's professional leagues have.

Of the 28 players invited to try out for Canada's Olympic team starting this summer, 21 are Secret Cup participants.

The teams play each other twice in a round robin with results augmented by a points system.

A win is worth two points, an overtime win 1.5, a shootout win one point, and half a point for an overtime or shootout loss.

A short-handed goal, hat trick, shutout, or scoring five goals or more in a game is each worth one additional point.

Montreal has eight points, Toronto has six points while Calgary is still pointless.