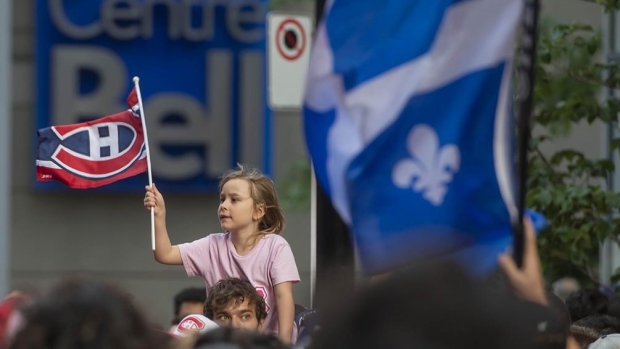 Montreal announced Thursday it will set up outdoor viewing parties to allow fans to watch the Canadiens play in the Stanley Cup final, a day after Quebec public health denied a request to allow more fans into the team's home arena.

The city said the free viewings will take place in the entertainment district beginning with Friday's game.

"We are slowly recovering from a historic pandemic, and this unifying moment that represents the Stanley Cup final is coming at the right time," Mayor Valérie Plante said.

"As of this Friday, Montrealers will have the opportunity to encourage their favorite hockey team, a source of pride for our metropolis, in its quest for (their) 25th Stanley Cup."

The city said details of the gathering would be announced later, but that public health rules would be respected.

Officials have been trying to organize a safe outdoor viewing option ever since previous games have attracted large crowds of fans in the streets outside the Bell Centre, the team's home rink.

The Quebec government on Thursday confirmed that it had refused a request by the Canadiens organization to allow about 10,500 fans into the arena, which would have represented half capacity.

The government issued a statement saying it decided to maintain the current limit of 3,500 fans in order to limit the spread of COVID-19.

But the health department said it will increase the number of people allowed to gather at outdoor festivals and events up to 5,000 beginning Friday.

People who are seated must be kept 1.5 metres from those who don't live with them, and masks are recommended when people are moving, the government said.

Plante said the new rules were what had allowed the city to finally organize its outdoor viewing party, and thanked the government for making the adjustment.

This report by The Canadian Press was first published July 1, 2021