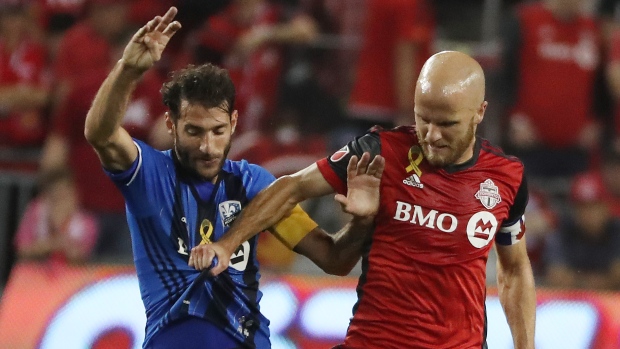 Toronto FC has secured the best record in the MLS and the Montreal Impact will finish outside of the playoff picture, but there will be lots to play for Sunday when the league returns from international break and the rivals meet at BMO Field.

With two games remaining on the schedule, Toronto FC sits three points short of the 1998 Los Angeles Galaxy for the most points in an MLS season. To claim their place in history, they will need four points from Saturday’s home match and next week’s season finale on the road against Atlanta United.

“Playoff mode has already begun for us and it’s important that we continue to be as focused and as hard out here in training as were last year going into the playoffs,” said Toronto FC defender Drew Moor.  “The mentality and the attitude has been that these final two games and the practice sessions are playoff level.”

“It’s important that we play our game and that we don’t worry about where Montreal is (in the standings).  It doesn’t matter where either team is in the standings, it’s a big rivalry game.”

TFC striker Sebastian Giovinco has not seen action since leaving a game on September 9th against the San Jose Earthquakes with a quad strain.  The superstar striker has struggled through injuries since the beginning of the season, but has been as productive as he’s ever been when healthy.

The 30-year-old is expected to make his return to the lineup this weekend and Toronto will be hoping that there is enough time for him to round into form before the playoffs begin.

After putting TFC out of the playoffs two years ago and falling to them in the Eastern Conference Final last year, the Impact will not get a postseason rubber match as they can no longer catch New York Red Bulls for sixth in the standings.

A victory on Sunday for the Impact would give them the season series over Toronto FC and make them the only MLS team to beat TFC on their home ground, which they would have accomplished twice if they come out on top.

"Regardless of the situation, you can always play for pride and honour,” said Impact keeper Even Bush

That would be a cap on a positive week where the Impact also announced they have locked up midfielder Ignacio Piatti to a two-year contract extension.

Toronto FC will hold their Supporters’ Shield presentation on Sunday so there will be massive incentive for their opponents to be at top their game to spoil the party.