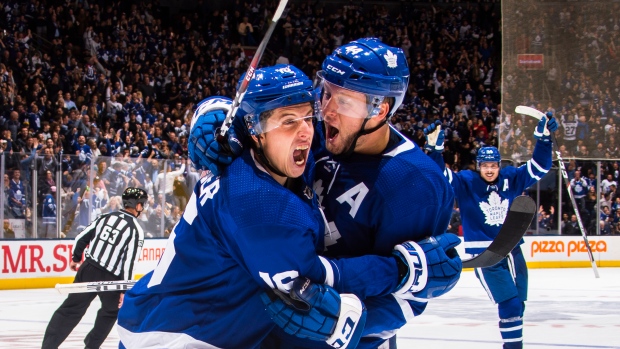 TORONTO — Mitch Marner and Auston Matthews have played sparingly together at even strength early in their careers.

With the Maple Leafs' injured captain looking down from the press box Saturday, the pair finally connected when Toronto needed it most.

Marner's bullet shot after taking a pass from Matthews glanced in off teammate Morgan Rielly at 3:54 of overtime as the Leafs defeated the Boston Bruins 4-3 in a hard-fought battle of Atlantic Division rivals with plenty of recent playoff history.

"I saw (Matthews) go around the back of the net and I didn't want to get too close," said Marner, who finished with two assists. "I knew that if there were sticks in the way he couldn't make the pass so I tried to stay higher in the slot.

The goal was initially credited to Marner, but changed to Rielly after the game.

"It went in," Matthews said. "That's all that matters."

Rielly, Alexander Kerfoot and Dmytro Timashov, with his first NHL goal, scored in regulation for Toronto (5-3-1), while Frederik Andersen made 43 saves in a stand-out performance.

David Pastrnak, with a goal and an assist, Jake DeBrusk and Danton Heinen replied for Boston (5-1-2), which got 25 stops from Jaroslav Halak.

"Give their goaltender credit," DeBrusk said. "He gave them a chance."

The Leafs played their first game without captain and star centre John Tavares, who suffered a broken finger Wednesday and will be sidelined at least two weeks. The Bruins, meanwhile, were missing veteran centre David Krejci (upper-body injury) for a third straight game.

"It's big," Rielly, who scored his first two goals of the season, said of the victory. "A team within the division, not having (Tavares) ... just a point in our year where we want to get going.

"We answered the bell."

The Leafs instead started with Matthews-Marner-Johnsson and Kerfoot-Nylander-Mikheyev, and tinkered with the top-six forward group at times throughout the night, depending on the situation. Johnsson left in the second period after blocking a shot and didn't return.

Babcock wouldn't reveal his plan moving forward — namely whether or not Matthews and Marner will continue playing together with Tavares on the shelf until at least early November.

"We'll just try to evaluate," said the coach. "We'll look at it, get it figured out and then go from there."

Down 2-1 despite a dominate second, the Bruins tied the score at 1:36 of the third just as a Leafs' penalty was about to expire when Heinen wired his first.

But Toronto replied just 61 seconds later when Kerfoot backhanded a loose puck past Halak for his third.

Andersen faced 33 shots through two periods, and the Boston kept coming late in the third, with Pastrnak tying things at 15:34 when he blasted a one-timer to force overtime.

Pastrnak now has nine goals, including seven in the last three games, to tie Edmonton's James Neal for the NHL lead.

Toronto lost to Boston in the opening round of the playoffs each of the last two springs — both series went the distance — but with Tavares, Zach Hyman (knee) and Travis Dermott (shoulder) all out injured, and some major roster restructuring in the off-season, just nine of the 18 skaters dressed in Game 7 back on April 23 were in Saturday's lineup.

The Bruins, who went on to make the Stanley Cup final before losing in Game 7 against the St. Louis Blues, dressed 13 skaters from that 5-1 victory against the Leafs.

Toronto and Boston will play the rematch at TD Garden on Tuesday, but the Leafs have to first worry about Monday's visit from the Columbus Blue Jackets.

The home side opened the scoring at 5:55 of Saturday's spirited first when Rielly's point shot with Johnsson battling in front went in off a Bruins' defenceman.

Timashov made it 2-0 at 15:44 when the rookie winger got the puck from Frederik Gauthier and moved into the slot before roofing his first-career goal past Halak.

The Bruins, who had 18 shots in the opening period, finally got on the board with 20.6 seconds left before the intermission when DeBrusk took advantage of some poor Leafs' defending.

Coming off Thursday's 4-3 shootout lost at home to the Tampa Bay Lightning, Boston fed off that goal in the second and had Toronto on its heels.

Patrice Bergeron and DeBrusk missed what looked like a sure goals on tap-ins at the side of the net. Bergeron and Marchand were then both denied on a power play by Andersen, whose team was 1-3-0 against the Bruins last season, but is 1-0-0 in 2019-20.

"Saturday night hockey," Andersen said. "It doesn't get much better."

Notes: The Bruins' top line of Bergeron, Marchand and Pastrnak has now combined to score 15 of Boston's 22 goals. ... Halak, who has shared the Boston crease with Tuukka Rask early in the schedule, made his fourth start of 2019-20. ... U.S. Open and Rogers Cup champion Bianca Andreescu of Mississauga, Ont., dropped the puck for the ceremonial faceoff.