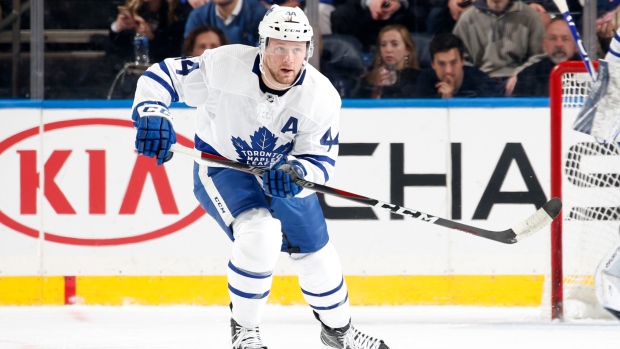 Rielly confirmed his return during the team's availability before their game against the Tampa Bay Lightning.

“I’m a little nervous for sure, but its also excitement," Rielly told reporters. "Most of all I’m just looking forward to being back.”

His return provides some much-needed help to a blue line that has been rife with injuries this season.

"He brings a whole other confidence level to our team and just settles us down in the D-zone," teammate Mitch Marner told reporters.

"The biggest thing for me, at this time of year especially, is just his voice and his presence around the team. In the locker room, on the bench, we don't have a lot of guys that I would say are the guys who are really vocal to kind of push you and get you going," head coach Sheldon Keefe said.

"If you were to ask me who the leaders are in that regard I would say Rielly and Muzzin. Also, their personalities are such that they keep it light and keep everyone loose and relaxed and I think that's important. That, in itself, brings a lot to the group."

Toronto holds a one point lead over the Florida Panthers for the third place divisional playoff spot.

The Leafs are coming off a California road trip where they gathered just one point in three games (0-2-1).